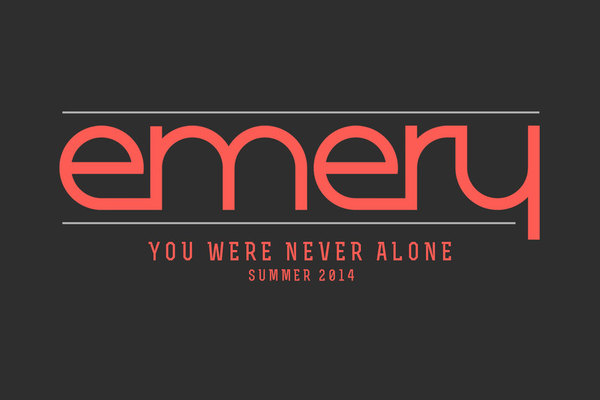 Yesterday the popular veteran rock band Emery launched a crowdfunding campaign on their website to fund You Were Never Alone, their upcoming sixth album. The album, which will see the return of founding member/vocalist, Devin Shelton, will be released this summer through their own BadChristian Music record label and Emery will be touring this summer in support of the new record. Since the start of the campaign less than a day ago, $20,187 has already been raised of the $50,000 target and there are 44 days left to raise the rest of the money, so, if you want to help Emery reach their goal, you can head on over to the campaign page and help them raise the necessary funds by backing and pre-ordering their brand new album.

In the campaign description Emery explains why they left behind a large record label contract to go independent and to partner with their fans to fund this new record,


“Because of our faith in your support of Emery’s music, we’ve decided to walk away from a great recording contract. This decision was made quickly, literally 15 minutes before finalizing the deal that was in place. And as scary as it was, we felt the need to leave a lot of money on the table. The amount was much greater than the $50,000 goal of this campaign. Sounds like a stupid decision, doesn’t it? It was money that we could have used to take care of our families, but like any record deal it came with a price.  We would not own our music.  We essentially would be selling it to a company—albeit, a great company, and one offering a fair deal—but something didn’t feel right about someone else owning Emery’s future recordings in perpetuity, especially when independent musicians are getting better opportunities to succeed every year.  We want to own our music.  We want to be able to sell it, give it away, re-record it in different ways, release vinyl, and do whatever we’re inspired to do with it.   We wish the same were true of all of our previous releases—all the Emery albums that you love—but sadly, we do not own them, and neither does Tooth and Nail.  Currently, Capitol Records owns and controls our entire back catalogue.  Would you like a vinyl pressing of The Question? That might never happen, because we’ve been unable to convince Capitol to do anything with it. If we had our way, we would be able to release our entire discography in new and creative forms… but we don’t… “

“It’s been almost 11 years since we released The Weak’s End.  That’s a little hard  for us to believe!  In that time, we’ve seen more success than we could’ve possibly dreamed. We’ve toured the world, released five more albums, and had the privilege of  getting to know a ton of you along the way.  You’ve never left us.  As we came up with what we wanted to say here, it almost brought us to tears.  We really were never alone. You are Emery.  You are the reason that we’re still here, and why our new record is going to be our most important.”

To find out more about the album, the campaign and to sample what the album will sound like, be sure to read the full campaign description and watch the accompanying video.

You really don’t want to miss this wonderful opportunity to back this project and for doing so you can receive some pretty sweet rewards in return – For example, for just $50, you could receive a Hi-Def digital download of YOU WERE NEVER ALONE two weeks before release day + 2 NEW songs from the album today (downloadable via email within 24 hrs of purchase) + CD and artwork signed by the band and shipped to your door, NEVER BEFORE RELEASED full length album from Joe 747, the 1999 prequel to Emery (Devin, Toby, Matt, and Joey), Never before released The Columbus EP, which includes 7 songs by Emery in 2002, YOUR FULL NAME in the thank you section of the liner notes + an exclusive You Were Never Alone T-Shirt available only through this campaign and an exclusive YWNA personalized poster signed by the band. Other rewards include limited edition vinyl with special edition artwork, a picture of you on the album cover, the chance to record a short audio message for a hidden track after a song on the record, a chance to write/co-write lyrics to a song on the record, house shows and many other things. All packages will also include downloads of two new, rough-version tracks from the upcoming album.

As well as backing the project, or if you can’t help financially, be sure to spread the word about this campaign to all of your friends by sharing this article through all of your social networks and be sure to keep Emery and this project in your prayers.