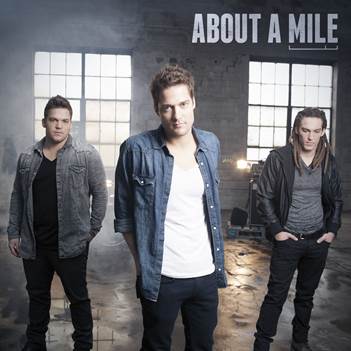 About A Mile To Release Debut Album On July 15

The self-titled debut album from new Word Entertainment band, About A Mile, is set to be released July 15. The album, produced by Grammy-nominated and Dove Award-winning producers Ian Eskelin (Francesca Battistelli, Sidewalk Prophets, All Star United) and Howard Benson (Hoobastank, Daughtry, Third Day), is available for pre-order today on iTunes and includes an instant grat track of their current single impacting radio now “Satisfied.” The trio, consisting of three brothers hailing from the working class town of Butler, PA, are joining Sidewalk Prophets on “The Live Like That Tour” this spring commencing on April 24 in Massapequa, New York.

About A Mile has received a warm response from radio programmers across the nation:

– “As a Music Director you can get pretty jaded and closed when dealing with new bands and artists. Then every once in a while someone blows open your expectations and reminds you why you do this. Adam, Luke and Levi [About A Mile] did that for me.” – Ben Milton, WGTS, Washington D.C.

– “I was completely blown away by the fire and passion About A Mile pours into their music and moved to tears by how raw, real and transparent they are willing to be. No doubt hearts will be moved and lives will be touched after an encounter with any one of their songs.” – Brandi Lanai, KSGN, Riverside

– “I haven’t seen this kind of passion from an artist in a while; the transparency in their stories and songs is incredible…” – Theresa Ross, WTRJ, Jacksonville

– “The guys are talented musician who have a ministry that they want to share. I love their single ‘Satisfied.’ They definitely have my attention and I’m excited to see what’s in store for them.” – Jeremy Henry, WJQK, Grand Rapids