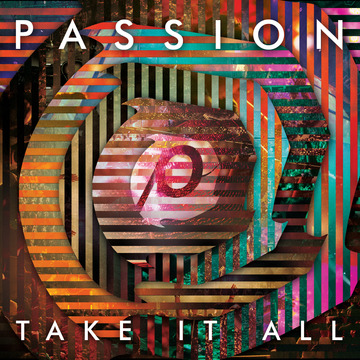 Recorded live in Atlanta and Houston earlier this year at Passion 2014, Passion: Take It All is set to release on April 29. The first single off the album, “My Heart Is Yours” from Passion featuring Kristian Stanfill, is set to debut at Christian radio on April 4. The new album follows the continued success of last year’s Passion: Let The Future Begin, which debuted at No. 1 atop Christian SoundScan and No. 4 on the Billboard 200. Passion: Take It All will feature a digital deluxe edition as well as, for the first time, a physical deluxe edition including a full talk by Louie Giglio from Passion 2014.

Passion 2014 was a two-day gathering in both Atlanta and Houston in January and February of this year, attended by a generation of 18-25 year olds from around the world and led by renowned pastors and teachers Louie Giglio, John Piper, Beth Moore, Francis Chan, Christine Caine, Judah Smith and others, as well as worship by GRAMMY® winners Chris Tomlin and Matt Redman, along with Crowder, Christy Nockels, Kristian Stanfill and Brett Younker. Over 35,000 students representing 46 countries and more than 1,200 universities participated at Passion 2014. During the two gatherings, students were challenged to personally give $500,000 to fund the printing and distribution of scripture for the people of Iran. This goal was exceeded as willing students gave over $670,000, providing 65,000+ Bibles to the people of Iran.
A final call-to-action given by Chief Steward of the End It Movement, Bryson Vogeltanz, encouraged students to continue raising awareness about the 27 million men, women and children trapped in slavery. To join in the Shine a Light on Slavery Day on Feb. 27, thousands around the world put a red “X” on their hand and posted a picture to social media to spread awareness and carry the message of freedom to the world.
Accompanying the release of Passion: Take It All, Passion will embark on a Spring 2014 Global Tour making stops in Abu Dhabi, Hyderabad, Delhi, Manila, Singapore and Honolulu. The tour will open up the opportunity for people of all ages to connect with the vision and heartbeat of Passion in their own city and join together in worship and prayer as a community seeking to make Jesus famous. For tickets and more information, click here. Passion 2015 has been announced to take place Jan. 2-4 and Jan. 16-18 at Philips Arena in Atlanta, and Jan. 30 – Feb. 1 at the Toyota Center in Houston.
Passion: Take It All
1.  Don’t Ever Stop [feat. Chris Tomlin]
2.  Never Gonna Let Me Go [feat. Kristian Stanfill]
3.  Let It Be Jesus [feat. Christy Nockels]
4.  At the Cross (Love Ran Red) [feat. Chris Tomlin]
5.  I AM [feat. Crowder]
6.  My Heart Is Yours [feat. Kristian Stanfill]
7.  Almighty [feat. Chris Tomlin]
8.  You Came To My Rescue [feat. Christy Nockels]
9.  Mercy [feat. Matt Redman]
10.  Come As You Are [feat. Crowder]
11.  Worthy [feat. Matt Redman]
12.  This Grace [feat. Kristian Stanfill]
13.  Sing And Shout [feat. Matt Redman]*
14.  My Heart Is Yours (Radio Version) [feat. Kristian Stanfill]*
15.  Let It Be Jesus (Song Video) [feat. Christy Nockels]*
16.  Come As You Are (Song Video) [feat. Crowder]*
17.  Crushed By Grace [Louie Giglio Talk]*
18.  Event Photo Video*
*Deluxe Edition Only

About Passion Conferences:
Led by a stirring in the heart of Atlanta-based pastor, Louie Giglio, Passion was birthed in 1997 to see the 20+ million college students across the globe awaken to the reality of an omnipotent and glorious Creator. Since then, millions of students from across the globe have joined the Passion movement, united across ministry and denominational lines, to seek the face of God in worship and prayer at nine conferences, four world tours and multiple one-day and regional events. Passion’s core scripture, Isaiah 26:8 states: “Yes, LORD, walking in the way of your laws, we wait for you; your name and renown are the desire of our hearts.” The small Passion Team is led by Louie Giglio and operates under the direction of a Board that is committed to spreading the fame of Jesus Christ to college students around the globe.

About sixstepsrecords:
Founded in 2000 by Louie Giglio, sixstepsrecords is a worship label and a division of Passion Conferences. sixstepsrecords’ artists include Chris Tomlin (Burning Lights), Crowder (Neon Steeple), Matt Redman (Your Grace Finds Me), Christy Nockels (Into the Glorious), Kristian Stanfill (Mountains Move), and Passion (Passion: Take It All). The label partners with Sparrow Records/Capitol Christian Music Group for A&R, marketing, sales and distribution operations. For more information on sixstepsrecords, visit: www.sixstepsrecords.com.
FEATURED VIDEO
Get your video featured here