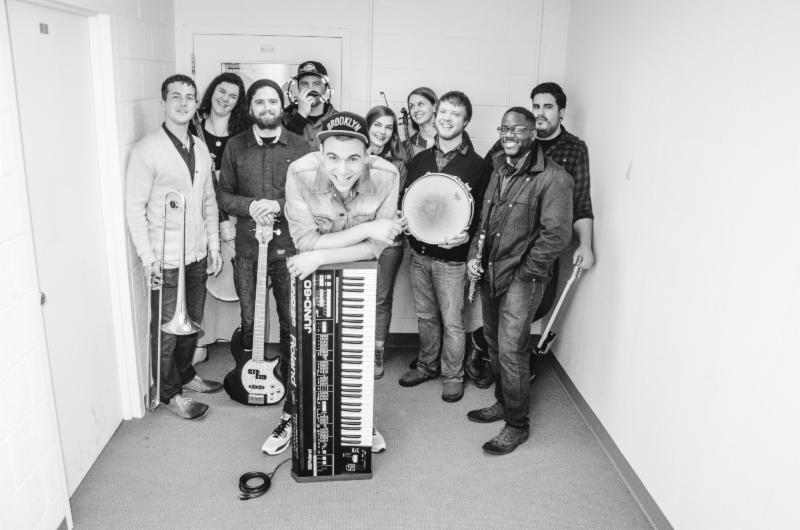 
Recently long-time post-hardcore band Emery broke away from Tooth & Nail Records to form their own label with a unique vision, dubbing the new label Bad Christian Music. Founded originally as a blog, the new label of course boasts Emery and the Emery-related side project Matt and Toby. The newest artist to the BC roster, however, is a “10 musician collective from Seattle” called Kings Kaleidoscope. The group’s beginnings were as a worship band for the Mars Hill Church, but they have since moved on. Their Live in Color EP is the official debut release on Bad Christian, and was recorded completely live at a gymnasium inside a Seattle middle school.

The album’s opener, “Fix My Eyes,” may be one of the slowest, but it’s also, without a doubt, the shortest song on the EP. Lyrically it sets the pace for the rest of Live In Color, while musically the song is also the softest, featuring only a piano and a few stringed instruments, which build all the way up until the end. Typically albums don’t start out with a slower song, but no other song really would have fit in as the EP opener. “Felix Culpa,” a groovy tune with a bright riff that’s in the forefront for  the majority of the song, follows. The horns add another distinct layer to the already-eclectic track, while a blaring guitar-line seems to be the end, but the actual outro lasts another minute or so, ending “Felix Culpa” on a much softer and more subtle note. The brightest song on the EP, “Seek Your Kingdom,” clocks in just shy of five minutes long. “Seek Your Kingdom” starts off with an ethereal piano part before the rest of the instruments and singer Chad Gardner join in. About a minute in, the main riff kicks into full effect, only letting up for the chorus the first time through. “Seek Your Kingdom” is certainly one of the edgier songs, if not the edgiest, on the EP.

“Defender,” the fastest tune on Live in Color, is an upbeat ¾ chart dominated by the strings and horns, the latter of which are particularly prominent during the chorus. The infectious riff towards the end of “Defender” really seals the deal, before it ends in a collective chanting of ‘oh’s. The Seattle-based 10-piece covers the hymn “Be Thou My Vision” next. The nice and modern interpretation of a timeless classic starts out slow, but eventually gains ground and ends up being driven by bells, trombone, a pounding snare, and even some guitar as well. “Higher Throne” closes out Live in Color, and is a slow epic with an almost-surreal vibe to it. The vocal harmonies on the chorus the first time around are sure to send chills down the spine of any listener, while the second time around, these harmonies are joined by a majestic-sounding flute line. “Higher Throne” once again builds all the way up until the end, before slowing the pace on the outro and it’s certainly a phenomenal way to finish things off.

Live in Color has something for virtually everyone. From the slower songs to the more upbeat ones, they are all impressive in their own ways. It is so eclectic and yet completely fluid. It’s really not surprising that Kings Kaleidoscope recorded the entire EP in one session, because otherwise it’d be extremely difficult for them to keep the consistency throughout on all six songs. As a whole, Live in Color is a stellar EP that is bound to leave the listener anticipating a full-length from the 10-piece group to release later this year.