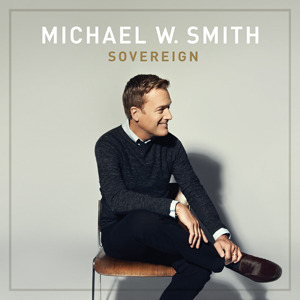 After selling more than 15 million albums, scoring 28 No. 1 hits, earning three GRAMMY® Awards and more than 40 Dove Awards, musical icon Michael W. Smith will open a new chapter in his career on May 13 as he releases Sovereign, his first studio worship album since 2008 and his first album with new label partner Sparrow Records and Capitol Christian Music Group. Sovereign will also be available as a Deluxe Edition, which will include a special DVD concert filmed at Smith’s barn in Franklin, Tenn. and will feature guest appearances from Kari Jobe and Leeland Mooring. The DVD will also include special behind the scenes footage and content with Smith discussing the inspiration behind Sovereign.

Well known as one of the most gifted artists and worship leaders of his generation, Smith’s previous worship projects have sold well over 3.5 million albums. Throughout the entirety of his career, Smith’s albums have received one Double Platinum, seven Platinum and 16 Gold RIAA Certifications. However, not one to rest on past success as he hits the “sweet spot” of his career, Smith is deliberately entering a new creative chapter on Sovereign, crafting a vibrant collection of vertically-focused songs with a fresh sense of musical innovation.
“I’m enjoying making music more than I ever have in my entire life,” Smith exudes. “I’m having fun and I’m excited about this record and this next chapter.”
In the spirit of this new adventure, Smith enlisted the talents of several songwriters and producers he hasn’t collaborated with previously for Sovereign, including Seth Moseley (Newsboys, Sanctus Real, Love & the Outcome) and Kyle Lee (Natalie Grant). Smith also tapped the expertise of producers Chris Stevens (TobyMac, Carrie Underwood, Mandisa) and West Coast-based writer/producer Jeremy Edwardson (Kari Jobe, Jesus Culture). Bridging the gap between a generation of worship leaders, Smith brought in one of his favorite singers, Kari Jobe, to sing on a track.
“You Won’t Let Go,” the first single from Sovereign, has quickly become a staple in Smith’s live shows. The song has also given Smith a triumphant reentry to Christian radio where it was immediately the most added at Christian AC, and currently sits at No. 22 on the National Christian Audience chart. The lyric video for the track can be seen below.
Sovereign Deluxe Edition CD+DVD
CD
1. You Won’t Let Go
2. Heaven Come Down
3. Miracle
4. Sky Spills Over
5. All Arise
6. You Are The Fire
7. Christ Be All Around Me
8. Sovereign Over Us
9. Hide Myself
10. The Same Power
11. I Lay Me Down
12. The One That Really Matters (Featuring Kari Jobe)
DVD
1. You Won’t Let Go
2. You Are The Fire
3. Hide Myself
4. The Same Power
5. All Arise
6. Sovereign Over Us
7. I Lay Me Down
8. Christ Be All Around Me (Featuring Leeland Mooring)
9. The One That Really Matters (Featuring Kari Jobe)
10. You Are The Fire (Reprise)

About Michael W. Smith:
Michael W. Smith is an acclaimed singer, songwriter, and musician who has sold more than 15 million albums, achieved 28 No. 1 songs, earned three GRAMMY® Awards, one American Music Award, and more than 40 Dove Awards. Throughout his career, the Contemporary Christian Music artist has had the opportunity to sing for several Presidents and national leaders. He actively supports the teen club Rocketown, Compassion International, and Samaritan’s Purse, the ministry headed by Franklin Graham. Michael and his wife Debbie live in Middle Tennessee, where they raised their five children. His first studio worship album since 2008, Sovereign, will be available in stores on May 13. For more information, visit www.michaelwsmith.com.
FEATURED VIDEO
Trampolines x Neon Feather - FutureGlow
Get your video featured here