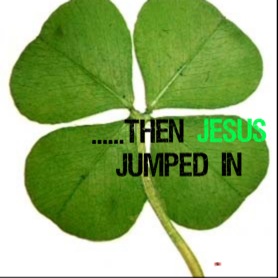 Caitlin’s Corner: ……Then Jesus Stepped In

I recently saw the movie “Son Of God.”
And like He normally does, Jesus made something pretty significant pop out at me.

In the scene where Peter decides to follow Christ, He’s in his boat – minding His own business.
….then Jesus jumped in.

Jesus wanted to make Him a “fisher of men.”
So, as Peter was going about his normal, everyday work, Jesus came to him and asked him to trust Him.
Peter, like any of us would have been, was skeptical.
I mean, here he was… just trying to live his life.
When Jesus just interrupted him in the middle of it.
Peter didn’t ask for Jesus to jump into the boat and take it over…. But He did.

And I guess that hits me so hard because the same thing happened to me.

Four years ago on this very date, I was a Peter.
I was going about my everyday life just minding my own business.
I was allowing Jesus to be in the same water with my boat….. but I hadn’t really asked Him to jump into it and steer.
However, He did it anyway.

Four years ago today, one of my best friends went to be with The Lord.
We were at church playing basketball when he had a heart attack and passed away.
I can honestly say that it was the hardest thing I’ve ever been through.
Months later, I lost a close family member.
Then some friends moved away.
This season of loss continued into December, when my youth pastor and his wife – who I was extremely close to, left the church and proceeded to move.

As cliche as it sounds, I literally felt like my whole world was crashing down around me.
I felt like I was losing everything that had been precious to me.
And I tend to think that Peter might have felt like this, too.

Little did I know, while I thought my life was falling apart, God was really putting it together.
Even when I didn’t think it was broken, He was fixing it.
He had to put me on my knees before He could teach me to properly stand.
He had to break me down before He could build me up.

How did He do all that?
Well…. He jumped into my boat even when I didn’t ask Him to.
He took control even when I hadn’t handed over the steering wheel yet.

I love the way Mike Donehey of Tenth Avenue North puts it…
“Jesus became my Savior when I was a kid. But He didn’t become my Lord until I was in college.”

This night changed everything for me.

On this night, I realized that I couldn’t go another day without letting Jesus take the wheel of my life.
My friend had a profound impact on my life.
He loved Jesus and really followed Him….
And I realized that if it had been my final night instead of his, I wouldn’t have been too happy with how my life looked up to that point.
I was living…. But I wasn’t really alive.
It took my best friend’s death to make that clear to me.

After everything that happened that year, I found myself seriously struggling to trust Him…
I mean, how could a loving God take away all those people from me?
How could someone who had my best interest in mind really cause that much pain?
Where was the Romans 8:28 promise I had heard so much about??

As untrusting as I was, God continued to show Himself faithful to me.
Even when I wasn’t sold on the idea of handing my everything over to Him, He kept walking with me every step on my painfully slow journey of heartache and hurt.
Even when I didn’t really want Him, He never left my side or let go of my hand.
He was perfectly faithful.

If I could sum up all of my life in 3 words, that’s what I’d say.
He is faithful.

This is incredibly personal and honestly hard for me to write.
It may be four years later, but it’s still not easy to talk about.
I’ve just admitted things that I’ve never said before.
I’ve just laid open my heart bare for all of the world to read.

Because I want you to know that He is faithful.
I’m doing this because God has given me a story to tell…. and now He’s given me a platform to tell it on.
He has been so extremely faithful to me, and I want to shout it from the rooftops.
No, it isn’t easy to tell the world that at one time, I struggled to trust Jesus…. but I’ll do it anyway in the hopes that someone will read this who is at the same point I was, and gain encouragement from it. I do this because I fully believe God allows us to go through trials so we can help others in their trials.
The people that helped me through this faced trials of their own, and therefore were able to help me.
Because of what I’ve faced, I, in turn, can help people when they come to me facing their own mountains.
We aren’t meant to do this alone. We need each other to lean on.

But the difference from four years ago and now is that back then, I didn’t know how to handle these things. Now I do.
Back then, I yanked back the wheel when I felt God wasn’t doing a good enough job steering.
Now? Well…. I still tug at it a little.
But I’ve learned to leave it in the hands of a God who knows far more about what He’s doing than I do.
Then, I fought Him for control.
Now, even though I want control, I’ve learned that it was never mine anyway.

I’m stronger in my faith right now than I’ve ever been.
And I can assure you that it never would have happened if Jesus hadn’t jumped in my boat four years ago.

Don’t misunderstand me…. I’m not saying that Jesus forced Himself on me.
He won’t do that. He will never force us to trust Him.
We have free will.

What He did do though, was make my life miserable enough that I found out I couldn’t do it on my own.
He made everything around me fall apart so I would reach out for the One Thing that would always hold together.
He made me hurt in ways I had never known so I would need the peace only He could give.
He made me see just how hopeless it was so I would grab onto the only real Hope.
He did whatever He had to do to get my attention, wake me up, and bring me back to Him.
I was slowly straying…. wandering…. walking away from Him.
But Hallelujah, we have a Father that pursues our hearts even if we leave.

Sometimes, He has to hurt us to help us.
That’s what He did to me that night.

He used my friend’s life and death to show me just how badly I needed to let Him take control.

My life was spinning out of control…. and I know that He made it that way so I would give up control and surrender every aspect of my life to Him.

So no… He didn’t force Himself on me.
But He did jump into my boat.
And I’m so glad.
I’m so thankful He came crashing into my life when He did.

Am I happy about how He did it?
Absolutely not.
But He did it the only way He knew would work.

Yes, it hurt then and yes, it still hurts now.
Yes, I had to give up some things that were important to me.
Just like Peter, I was asked to hand over control.

He crashed into my life at the perfect time.
He knew what was best for me.
And even though He didn’t want to see me hurt, He knew what He had to do to wake me up and make me realize that life is short and precious.

Because of that night – because of my friend – I am changed.
I’m not who I was four years ago.
All for the better.

I look back at those days and I cringe at the moments I may have missed where He was calling out to me.
Even when I couldn’t hear Him or even when I ignored Him, He kept calling.
He pursues us when we don’t want to be pursued.
I’m thankful that He still jumps into boats.
He took a chance on me… He took a chance on jumping in, knowing that I could still kick Him out.
But I can honestly say that He is the best Thing to ever happen to me.

You never think when you’re barely a teenager and all this stuff is happening to you that you’ll end up being thankful for it….. or at least I didn’t.
But I am.

I’m thankful for the pain because it pulled me close to Him.
It showed me where I was wrong and what I needed to fix.
It opened the right doors and closed the wrong ones.
He has brought so much beauty from that pain.
He has redeemed so much of what was broken.
He made new the places that were old and worn through.

It taught me I can trust Him.
After going through all of that at 12, I feel like I can face anything now.
Because I know that no matter how hard, He will be with me through all of it.
He uses it to strengthen us and make us who we need to be.

I’m still a work in progress… and I know there’s more pain on the way.
But I also know that I’ll be okay.
I’ll never be the same and I’m never going back.
I am redeemed because Jesus jumped in my boat even when I didn’t ask Him to.

So what areas of your life do you need to hand over to Him?
Learn from my story…. let it go.
Let Him have those pieces.

He can do much better things with them than we ever could.