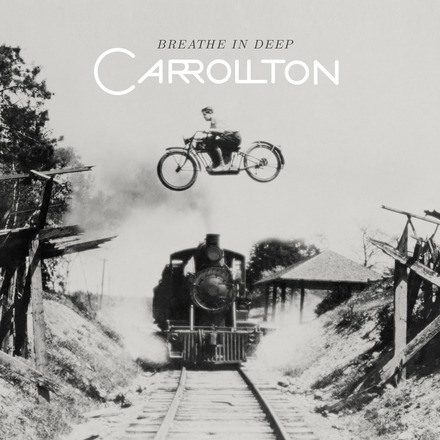 Carrollton is a special band to me. I can’t really explain it, but I heard about them and simply fell in love with their story, and then their music reaffirmed that love. Maybe you will fall in love with them, too!

Carrollton was started by four friends- Justin Mosteller, Jeremy Menard, Michael Loy and Jordan Bailey. Justin and Jeremy live in Cincinnati, Ohio, while Michael and Jordan live in Louisville, Kentucky. They all met over the years by being in involved with worship at church, and became close friends – they loved each other with an unbreakable bond. They decided to form a band and they attended an artist retreat hosted by the Centricity Music label. Little did they know that someday Centricity would sign them onto their label. Jesus certainly works in mysterious ways.

The name “Carrollton” comes from the city that happened to be halfway between Louisville and Cincinnati, where the guys met to work on music and to strengthen their relationships. The small city was a restful place – it was a place filled with good memories. That is really neat to me – I love how personal their name is!

Carrollton works everyday to give hope to people through their music and to honor God through everything they do. They are completely real and totally open with their music as it’s simply their stories set to a melody.

Breathe In Deep is filled with some of my new favorite songs. They’ve got a kind of country influenced sound, but they are singing with a new-age worship style at the same time. I don’t know how they pulled that off, but they did – and they did it well!

One part of the first song, “Pass You By” really stuck out to me. It says:

“Don’t let the things you can’t change
keep you away
from the things that matter most.
You can rush from the sunrise till dusk of the night sky
and not see the beauty in both.”

The theme of that song is about not letting life pass you by and is a great reminder to slow down. The album name came from the re-occurrence of them saying “you gotta breathe in deep.” I really love this song – it’s quite refreshing!

My next favorite is “Holding Me.” It is talking about a woman who is so broken,  she cries out to God because she believes He is there. The chorus to this song is simply beautiful:

You’ve got to give it a listen!

I also really liked “Death Has Lost It’s Way.” The main theme of the song is that Jesus finds us in our darkest hours and breathes life into us. It is a humbling, yet loving reminder and, on top of that, it’s a fantastic worship song. I recommend it to everyone!

Overall, this album is awesome. It’s a new favorite of mine, and Carrollton is definitely going to be on my playlist for a long time. They sound very modern and their songs are completely beautiful. Do yourself a favor and listen to this album – it’s worth every penny!