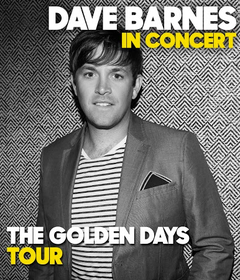 Grammy and CMA Award- nominated artist and songwriter Dave Barnes has announced select dates for his “Golden Days Tour.” The tour is in support of his brand-new release, Golden Days (50 Year Plan Records), and will kick off March 30 and run through early May. Singer/songwriter Andy Davis is the supporting act for the tour. Tour dates are listed below.

Concertgoers will be able to hear some of their favorite Dave Barnes songs along with many of the new tunes found on Golden Days. One song guaranteed to be played at each show is “Good,” the album’s first radio single. A brand new music video for “Good” is out now, so be sure to view it below.

There’s no question Barnes is ready to get back on the road, especially to share his new songs from his eighth album to date. “It’s always so much fun to play shows after releasing a new album, and playing songs from Golden Days is going to be no exception,” he shares. “I haven’t played but a couple of these new songs live, and I can’t wait to see how people respond, to see what songs translate – which songs resonate with people. We also decided to wait a couple of months before touring on the album in hopes that people will have some time to live with the songs so when they come to the shows, they know them better. It will be a lot of fun!”