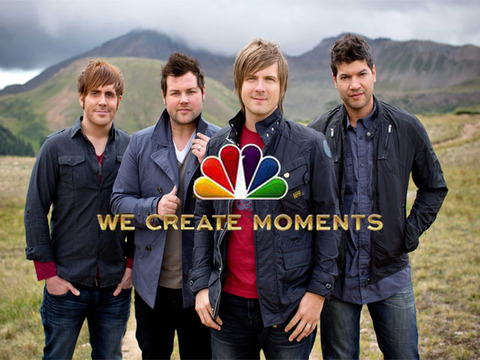 Four-piece hit-making band The Afters has already had a win this year. The band’s song “Moments Like This” was selected by NBC as the feature song for their “We Create Moments” promo campaign. The song aired frequently during NBC’s promo ads around the Winter Olympics last month, and will continue to run alongside other programming in the weeks ahead. Earlier this year, “Moments Like This” was used on the hit reality show American Idol (FOX). Check out the video for NBC’s “We Create Moments” campaign below.

“Moments Like This” comes off The Afters’ fourth studio album, Life is Beautiful which was released earlier last year. The chart-topping foursome recently celebrated their last single “Every Good Thing” going No. 1 with their current single “Broken Hallelujah” following in its footsteps as it rises on the charts. They are out on the road performing their hit songs with five-time GRAMMY® winner Steven Curtis Chapman on his “The Glorious Unfolding Tour.” For tour date information, visit: http://theafters.com/tour.

About The Afters:
Texas-based, four-piece band The Afters were propelled into the national spotlight with their INO/Sony Music Label Group debut I Wish We All Could Win. The project spawned the swirling, melodic hit “Beautiful Love,” earning the band an enthusiastic following when the song was selected as the theme track for MTV’s “8th and Ocean.” “Beautiful Love” was also the most downloaded track of 2006 on the iTunes ® Inspirational charts and garnered the band an mtvU award as well. The Afters’ sophomore release Never Going Back To OK (INO/Columbia Records) debuted in the Top 50 on the Billboard Top 200, and proved to be sensation on the silver screen with “Grey’s Anatomy” (ABC), “Dr. Phil,” “Army Wives” (Lifetime) and “Rachael Ray.” The band’s third record Light Up the Sky bolstered two No. 1 radio hits, as well as placements on “The Biggest Loser” (NBC) and “You Deserve It” (ABC). A slew of media including Rolling Stone, Seventeen.com, E! News Live, TV Guide, Premiere Radio and more also picked up on covering The Afters. The band released its fourth studio album, Life Is Beautiful in April 2013 via Fair Trade.
FEATURED VIDEO
Get your video featured here