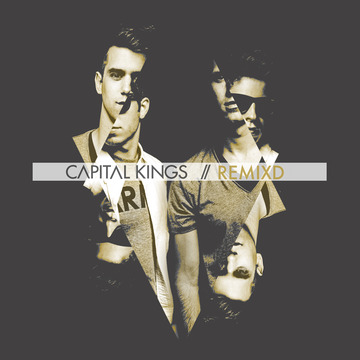 After finishing the popular “Hits Deep Tour” with TobyMac, electronic-pop duo Capital Kings (Jon White and Cole Walowac) is gearing up for the release of their new project, REMIXD, on March 11 at all digital outlets. REMIXD will compile several remixed tracks from their self-titled album, which released last year, as well as the brand new song “Be A King.” The album will be available exclusively as a CD at Family Christian Stores beginning March 25.

In support of the new project the radio network Air1 is streaming the entirety of REMIXD as part of their 1stListen promotion starting this week at www.air1.com.

The remix project will also feature the winning track from Capital Kings’ U:REMIX campaign, which called for fans to take an original Capital Kings song and remix it as their own. Through an online contest, the winning contestant and remix (“I Feel So Alive [Matthew Parker U:Remix]”) was chosen and will be featured on REMIXD.

The dynamic remix masters continue to build on the momentum of their early success with recent remixes for Colton Dixon, Natalie Grant and Crowder while working on a brand new album. They also made waves at the 2014 Passion Conferences in Houston and Atlanta earlier this year, opening with a thrilling and energetic performance for over 20,000 students representing 1,200 universities and 33 countries. They kick-off the exclusive “Summer Shed Tour” with TobyMac, Skillet and Lecrae in May.

About Capital Kings:
Capital Kings has already begun to make their mark as one of the industry’s hottest new acts, remixing on acclaimed artists’ records including TobyMac (EYE ON IT, Dubbed & Freq’d), Group 1 Crew (Fearless), Mandisa (Remixed: Get Movin’) and Britt Nicole (Gold). The D.C. natives made a splash last year with their debut self-titled record that featured TobyMac, Britt Nicole, Royal Tailor and Soul Glow Activatur from Family Force 5. The duo spent the year impacting all across the country – being featured on the West Coast and East Coast run of the Winter Jam Tour, touring with Family Force 5, playing international show dates and the halftime show at an NBA game (Oklahoma City Thunder) and opening for renowned act Neon Trees. Capital Kings will join up with TobyMac, Skillet andLecrae on the “Summer Shed Tour” in May.

About Gotee Records:
In 1992 a production team of three talented guys with diverse tastes shared a love for music. Producers Joey Elwood and Todd Collins, along with GRAMMY-winning artist TobyMac, launched Gotee Records in 1994 after unsuccessfully finding a label deal for the R&B trio Out of Eden. With a steady focus on artistry, the new label expanded to reflect the diverse interests of its founders. Within 12 months, Christafari, GRITS, and Johnny Q. Public were signed, easily representing four different music categories: R&B, reggae, rap and rock. In the 20 years since Gotee’s founding as a record label, it has launched the careers of Relient K, Jennifer Knapp, Sonicflood and more recently, Jamie Grace, Capital Kings, Finding Favour and Ryan Stevenson. The present day in the Gotee story is much like the label’s early days. Through all the changes in a tumultuous music industry, the boutique label’s independent spirit is maintained through a steady focus on artist development and diversity.