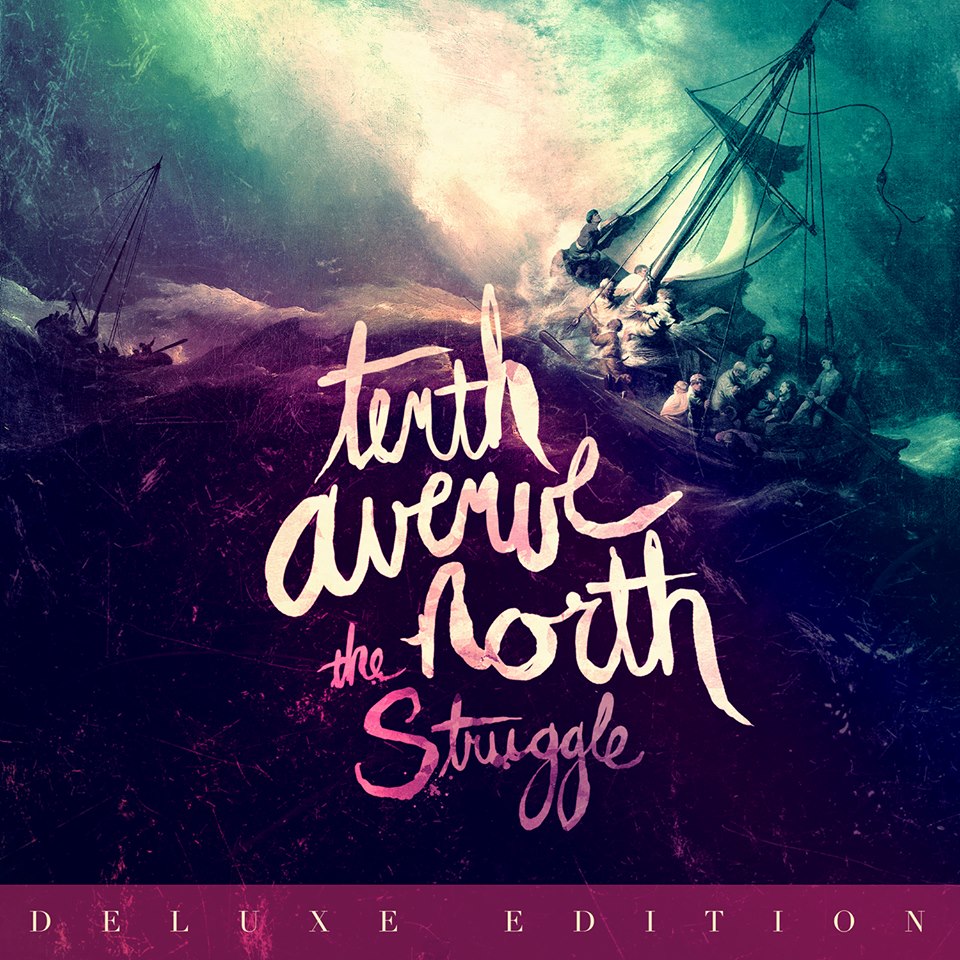 With their signature melodic and honest sound, Tenth Avenue North released The Struggle in 2012 to mixed reviews. The anthem-like album contained 12 tracks all falling into the theme of ‘struggle’ and broached the topic of pain in a fresh and compelling way. Now with a bonus 6 tracks, the Florida natives have re-released The Struggle in a deluxe edition, giving fans old and new alike a fresh taste of the heart behind their lyrics and the overall vision for the release.

Opening with “Shadows,” the quintet bring their melodic and catchy rifts into the spotlight, reminding fans why they first fell in love with the release. It’s this track that also gives listeners a taste of the honesty that can be expected throughout The Struggle. Singing, “Oh Lord please come raise my dead heart,” the band use familiar imagery to communicate the desperate need to cling to God when we are able to settle for the shadows of what he has to offer us on earth. Continuing with the title track, “The Struggle” opens with an organ, with the initiation of electric guitar and drums making it contemporary. This is perhaps the most anthem-like song on the album as it celebrates the refinement that comes through hardship. The desperation in lead singer Mike Donehey’s voice builds until the chorus becomes a victory song that reminds us to have hope in the hard times.

The decision to include a demo version of “Worn” in the deluxe version highlights the vulnerability of the band. As with the studio version, the demo of “Worn” is brutally honest and the rawness of it focuses more attention on the soulful tones of the band. While listeners do receive the same track in essence twice, it is the overall quality of this song from the vocals and musicianship to the lyrics that make it a standout track as it communicates the message of a weary soul needing rest.

The Struggle continues with remnants of Mat Kearny tones in “Losing,” before transforming into a gospel chorus which makes up “Grace.” “Don’t Stop The Madness” challenges Christians to embrace the struggle we feel within ourselves when we are convicted. While the lyrics “If you promise pain it can’t be meaningless, so make me poor if it’s the price of freedom” are unconventional and not perfectly theological, the overall purpose of the track in having listeners shine a light on their own spiritual walks is accomplished, and the band must be given credit for their bravery in addressing the hypocrisy often found within our own lives. While the majority of Tenth Avenue North’s lyrics are honest and compelling, there are a few instances within The Struggle that cause you to just take a moment to pause. In “Hostage of Peace” they say, “If we’re violent let it be against ourselves,” and later in “You Do All Things Well” they sing, “You cut me to touch me.” In this, the ideology of a God who wants us to suffer is suggested. While the band could have phrased these lyrics more correctly, the overall context of these songs and the album highlights the band’s intent on God using our pain to make us more like him, empowering us in our struggles as we seek to follow Christ.

Of the six bonus tracks, the Dressing Rooms Sessions will most certainly be a favorite for listeners. The quality of “The Fighter” and “No One Be Left Outside” is equal to that of the original 12 tracks and highlights the vocal quality and sincerity of the band. The inclusion of “A Kingdom Come” and “Lead Me Higher” are also fitting as the album draws to a close. The initial release concluded with “Lamb of God,” a worship song drawing on the phrasing of the Psalms. While beautiful, this does not seem to encompass the full message of The Struggle. Due to this, the 2 bonus studio tracks wrap up by talking about the hope we find in Christ and His return; a fitting end to a release focused on drawing closer to God in our hardships.

While fans may already own The Struggle, the 6 bonus tracks complete the rerelease in quality and content. With a few lyrical discrepancies it is possible to pass by the deluxe edition, but this would show a failure to recognise the amazing talent and heartfelt tracks found on the album. Revisit each of the first 12 tracks like an old friend and have the Spirit lift your heavy head with the melodies, before allowing the bonus tracks to rejuvenate the eternal hope living in us. The Struggle: Deluxe Edition by Tenth Avenue North is out now and is most certainly worth adding to your collection. It is only available for 30 days since its launch so be sure to grab your copy quick before it’s gone!