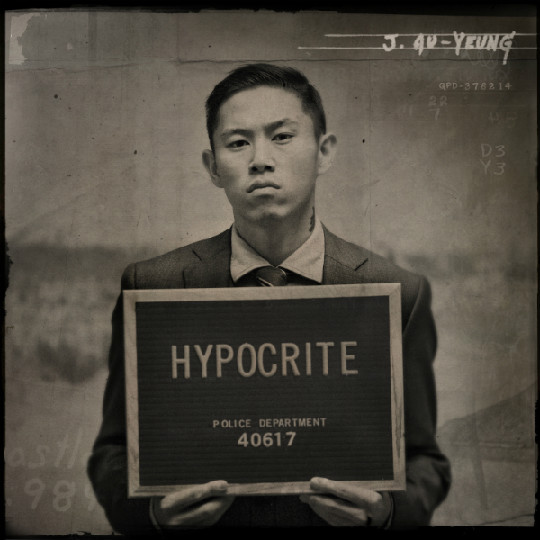 Battle rapping hiphop legend Mc Jin continues his shift in focus with his EP entitled Hypocrite.  From the first track to the last, Hypocrite plays as a “put all the cards on the table” testimonial and MC Jin uses no gimmicks or cliched hooks to pull the listener in.  Where some of the addressed subject matter may not be brand new topics, they are delivered from a clearly introspective and autobiographical point of view, thereby erasing any opportunity for dilution of legitimacy.

The intro masterfully prepares one for the journey Jin is about to take them on, and the outro puts a nice neat bow on the package. The one challenge with any EP is there is less hiding spaces for weaker tracks but Jin has no cause for concern here, as every single track is of equal value in telling the story on the album as well as entertaining the listener.

In a live interview with Rapzilla back in December around the time of the EP release hosted by Tyler Burns, Jin references “Don’t Walk Run” as the most challenging track and best representation of the album as a whole.  It is encouraging to see such transparency laid out for millions to be exposed to.  He also mentioned that a couple journalists identified said track as the ‘weakest’ on Hypocrite.  A review is largely based on a writer’s opinion, but the term “weak” doesn’t fit any tracks on the album, certainly not this one.

“Hypocrite,” the track, picks up right as Jin’s prayer intro fades out, and leaves the listener with little time to buckle up as both the beat and the message hit hard from the jump.  “Hypocrite” also sets the tone of the album as a whole, being that the point of it all transcends the entertainment aspect of his medium of choice.

“Behind Enemy Lines” advances the thought of practicing what you preach in the first track to admit that Christians are not without temptation and the challenge of doing what is right.  The driving thud that propels the listener through Hypocrite remains on “Behind Enemy Lines.”

“Don’t Walk Run” shoots out of the gate with a Bionic Man inducing intro to his cautionary tale of the challenges we all face with saying no to those things which threaten to keep us from a deeper relationship with our Heavenly Father.

“Fear Factor” takes its foot off the gas ever so slightly and features a chorus of encouragement from Amante Lacey that parallels Jin’s own message of dusting yourself off and trucking on.

“Dead Man Walking” features Toestah and is an affirmation of Jin referencing his past and confirmation of where he now draws his energy from and how he defines his success.

“Broken,” first introduced by a piano riff, and then an orchestral accompaniment later on as well, is an extremely emotional and thought provoking song, especially when Caleb Lin sings the chorus. Jin begins by identifying the difference between being broken and being beyond repair and then, in closing, he addresses God asking for his imperfections to remain if they can be used to advance His kingdom.

The outro, “Healing,” is a two minute walk back through the album, in a bit of a hybrid rap/spoken word format.  Jin reiterates his insecurities, admits his challenges, and just as in the intro, asks for clarity in his walk. Anyone who takes the opportunity to do the same, will surely call MC Jin’s Hypocrite a success.  As Jin stated, his purpose for the album extends beyond the goal of being entertaining.  To use a term coined by Hip Hop legend KRS-ONE, this album belongs in the “edutainment” category.

For any fan of hiphop, CHH or otherwise, Hypocrite belongs in the rotation.  Masterful lyrics, well polished beats and thought provoking subject matter make this the type of album that threatens to wear out the repeat setting and drain batteries on the listener’s music playback device of choice.

His album can be purchased here https://itunes.apple.com/us/album/hypocrite/id760212378 and here https://www.thegreatcompany.com/product/mc-jin-hypocrite-ep/.