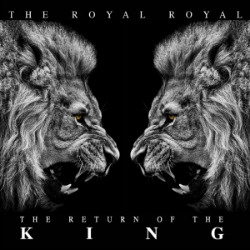 Nathan and Gabriel Finochio are The Royal Royal, brothers who grew up as pastor’s kids with a love of all things musical. Mesh this with a four year stint with both studying at Portland City Bible College, and the duo have established themselves as a band described as “the intersection of new sounds and ancient truths.” Their first release Royalty was spawned from their organic worship time and proved to resonate with the public peaking at #15 on the Christian music charts. Sticking with what they do best, The Royal Royal continues with their sincere and biblical worship with the release of their sophomore album, The Return of The King (The Paradigm Collective).

Opening with standout track, “The Lights,” listeners are greeted by the sound of a beautiful electro-dance synth. Staying true to their biblical roots, it is evident from here on out that each lyric has been taken from the pages of scriptures. Yet the brothers have an innate knack of simplifying even the most profound Christian doctrine singing, “And we are made alive in you. Holy Spirit you are making all things new.” Due to this, “The Lights” borders the line between a catchy track you would expect to hear at a youth group dance and a distinctly honest and meaningful song which brings you closer to Christ.

It is with this mentality that the album continues; each track full of the vibrancy of a youthful worship session, yet the spiritual maturity of a band using their musical gifting to make the promises of God more alive to an audience desperate to be fed his teaching in a way that is relevant to them.

“Every Little Bit of Praise” emphasises the vocal quality of the band, the acapella introduction highlighting the gritty tone to their voices. The lyrics are simple and a listener may be left asking why there isn’t more to the repetition in much of the chorus, yet The Royal Royal communicate the message of their song perfectly through this: that Christ is the creator and is worthy of all praise. The highlight of this track comes in the bridge where the message of the song expands. With echoes reminiscent of Downhere they sing, “You’re in my heart, you’re in control, you’re my comfort in the storm.”

As the album continues, the varying musical influences and life experience of the band becomes apparent. While there is nearly always an electro/dance tone to each track, elements of 80’s influenced Christian pop with an overwhelming brass section are displayed in “On and On (Find Me)” and later an old-school rock introduction to “Great,” before the album displays slight Celtic tones in “The Beautiful Name.”

As a track, “Real Strength” stands out due to the melancholy sounding vocals. In this listeners are able to understand the sincerity put into creating this album as the vocal vulnerability of the brothers becomes more important than the melody behind it. This continues in “Shine” where we are treated to a track utterly focused on the vocals and lyrics with a soft piano behind them. When attention is drawn away from the band’s impressive melodies and synths, the heart behind each word sung becomes apparent. As Nathan says on their website, “Our prayer for you is that you connect with Jesus through these songs, that our song is clear and heard, and that you are inspired to sing your song.” This mission is fulfilled implicitly through the authenticity shown in their eagerness to fold Biblical truth and their own thirst for God into each track.

While it is somewhat hard to place The Return of The King into a single genre, the influence of many genres showing up in various tracks; the album is a reminder of the infinite nature of God and the fact that irrespective of where we are in our walk with Christ, it is imperative we come back to the core of who He is.

The Royal Royal makes an impressive re-appearance to the music scene with The Return of the King and you can purchase your copy on March 4.