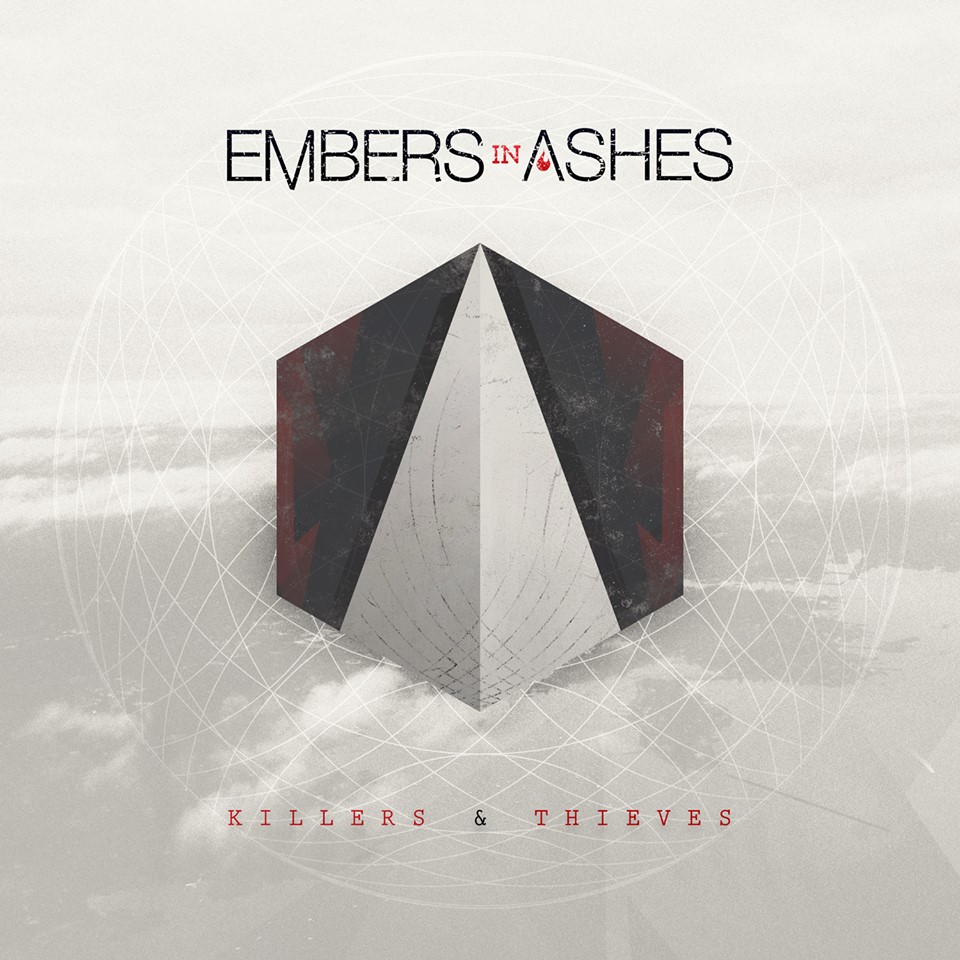 Alabama-based heavy rockers Embers In Ashes return with their sophomore release on Red Cord Records. The quintet, focusing heavily on vocal harmonies and racing guitar riffs, has created another decent collection of rock songs on Killers & Thieves which are sure to delight many a long time Embers In Ashes fan and, also, attract some new ones. Let’s take a closer look…

The album opens up with a metal feel through the heavy hitting track “Set Fire.” Dominated by soaring guitar riffs and driving drum patterns, “Set Fire” does a great job in setting the tone for the album and the catchy chorus, “Set fire to this house, burn it to the ground. Things will be different now, We’ll start over some how,” brings in the message of the song which is left slightly open to interpretation. My personal interpretation would be of what seems to be a song about repentance (or the lack there of), with the lyrics coming from the perspective of someone who keeps sinning, asking God for forgiveness, then just continues to make the same mistakes. The chorus is then asking for God to set them on fire for Him and turn them away from their life of sin.

Possibly the most unique track on Killers & Thieves is “Into My Arms,” which brings in a more electronic feel. With synths layered throughout, they even bring in some dub-step into the background of the bridge, making this track in particular, sound similar to something you might find off the latest album from Nine Lashes. According to Embers In Ashes’ guitarist Ryan Jackson, “‘Into My Arms’ is for those who face rejection like mine. This song is for those who have seen the face of isolation and loneliness and chose to give up a lot like I did. ‘Into My Arms’ is not about cleaning yourself up or trying harder. It’s about living in the tension of forgiving and wrestling.”

The next track “Guide Me Home,” is arguably the best song on the album, as well as being the heaviest. Something that may surprise newcomers as well as returning fans to the band, is the progressive, slightly metal-core sound that Embers In Ashes has going throughout Killers & Thieves and, on the whole, it works well. The track opens with some awesome heavy hitting riffs and opens into a welcoming chorus, “You guide me home, when I’ve lost my way. You guide me home, when I run away.”

The next two tracks, “The Mirror” and “Night From Day,” both take a familiar rock approach and although both are good, solid songs with catchy lyrics they both fail in adding much to the album. That being said however, “Night From Day” is the strongest of the two and does feature easily relateable lyrics and many are sure to gain comfort out of them, “only You can save us now, only You can get us out, see the mess we’ve made, we’ve strayed so far, we can’t tell the night from the day.”

The title track “Killers and Thieves,” is a solid rock song with a great message, including the lyrics, “Just take me as I am, an empty heartless man. Hold me in Your arms, and give me life again. I live for the day, when You will call my name. I’ve got just one wish, just to see your face.” While “Killers and Thieves” isn’t as heavy as the rest of the songs so far, it is definitely one people will be able to easily relate with and sing along to.

While “2000 Miles” has a fast tempo, heavy guitars and nice vocals, it also highlights some of the minor problems with Killers & Thieves. Multiple times throughout the track, the snare fills in off beat of the kick, creating a slightly jumbled mess of sound. You can see where they were heading but sadly the execution doesn’t fair quite as well as they’d hoped.

“Stones,” is an instrumental track which feels kind of strange and out of place. It’s an awesome track don’t get me wrong, but it takes far too long to realize that it has no vocals. Too many times I’ve found myself listening to it, waiting for some vocals to come in, only to realize there are none. This may be the case because, although the track is awesome, it feels like a very complete song that would normally have vocals. Most of the time with bands in this genre, an instrumental wouldn’t have such a fullness to it; rather it would feature more of a slow, ambient like tone. So I guess it’s a question of whether Embers In Ashes receive bonus points for creativity? Or lose some points for the lack of vocals? It’s hard to decide.

“Right In Front Of Me,” has a nice mixture of soft and heavy with both the slow elegant moments and the harder riffs found in many of the other tracks. This track, similar to “Killers and Thieves,” has a message many can relate to, but isn’t new or profound in the Christian market, “I can’t see what is right in front of me, You’re always there, to lead me home.”

Rounding out the album, “What Matters” takes on a slower tempo and features more solid vocal work from Jeremy Bates. “What Matters” is a cry out to God, portraying the fact that mistakes from our pasts haunt all of us and that it’s only with God, and through His guidance, that we can truly put those behind us and move on, “Mistakes from my past haunt me every day, I think of all I’ve done, how can I be saved, breathe on me new life, I know there’s more than this, wake me up inside, show me how to live. Show me what it is that matters, focus every breath I take, take my life broken and tattered, remake me all for Your sake.”

All in all, Embers In Ashes have created a very decent album, but one that will probably not be on many top ten lists by the end of the year. That’s most likely due to it not really breaking much new ground and it may fail to stand out in the highly competitive rock scene. Killers & Thieves is one of those albums where if you love Embers In Ashes’ music then you are going to love this album for a long time to come, but if you don’t, then the majority of the album will be fairly forgettable and a miss for you. However, if you’re in the latter category, then the four standout tracks, “Guide Me Home,” “Into My Arms,” “Killers and Thieves,” and “Right In Front Of Me,” will still provide you with a few more great tracks to listen to. With all that being said though, Killers & Thieves is something worth checking out, especially for fans of Sent By Ravens, Secret & Whisper, Cry of the Afflicted, Thrice, Nine Lashes, Haste the Day and similar bands.

Buy Killers & Thieves from these, and other retailers:
iTunes | AmazonMP3

Check out the lyric video for the lead single “Into My Arms” below, and be sure to grab your free download of the song from us here.