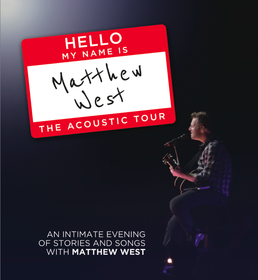 Four-time Grammy nominated and American Music Award winning artist Matthew West announces his upcoming tour, “Hello My Name Is…The Acoustic Tour,” which begins March 13 through the end of April (dates listed below). This exclusive tour will be an evening of acoustic songs and stories with West from his acclaimed album Into The Light.

“I started out as just a guy and a guitar in a Barnes & Noble bookstore, playing for free coffee and tips,” shares West. “Over the years I have been so blessed to see God continue to expand the platform He has given me. My band and I have traveled the country, playing in churches, theaters, summer festivals, and even in arenas. While I am so thankful to see so many of my dreams come true and the shows getting bigger and bigger, I never want to forget how it all began. This is the heart behind this tour. There’s something undeniably special about taking the stage in a more intimate setting. I’m a storyteller at heart, and I can’t wait to spend an evening with the audience telling powerful, true stories, and singing the songs that were inspired by them.“Into The Light has produced two radio hit singles – “Forgiveness” and the record-breaking single “Hello My Name Is” that became the first single to chart for 17 weeks straight as No. 1 on the National Christian Audience radio chart. While the aforementioned single continues to chart, West has released a new single from the GRAMMY-nominated album currently at radio and charted the first week out of the gate. “Do Something” is currently charting at No. 23 on the National Christian Audience chart, No. 22 on AC Monitored and No. 18 on AC Indicator charts.

Inspired by more than 10,000 stories for his latest album, West wrote “Do Something” after reading a story about a Colorado college student, Andrea, who spent a semester abroad in Uganda. Her time there led her to an orphanage in critical condition in which she felt compelled to improve the conditions and to “do something” and chose to stay in Uganda past her semester. West says that Andrea’s story floored him as she was truly being the hands and feet of Christ and not just talking about it but doing something. Check out his recently released lyric video for this inspiring single below.

About Matthew West:
An ASCAP Christian Music Songwriter/Artist of the Year winner and lauded by The New York Times as “a vivid and compelling songwriter with impressive approaches to the familiar,” four-time GRAMMY® nominee Matthew West’s discography includes acclaimed releases: Happy (2003), History (2005), Something to Say (2008), The Story of Your Life (2010) and Into The Light (2012). His 2010 studio album, The Story of Your Life, was inspired by 10,000 stories from every state in the U.S. and 20 countries. The album garnered attention from CNN Online, Fox News, Billboard, Country Weekly, American Songwriter and more. The Story of Your Life gave West the largest street week debut of his career, selling over 10,000 units the first week landing at No. 3 on Christian Soundscan, and No. 41 on the Billboard Top 200. His songwriting credits include cuts by Rascal Flatts, Billy Ray Cyrus, Diamond Rio and more. West was nominated for a Primetime Emmy® Award for Original Music & Lyrics for “The Heart of Christmas” from the film of the same name. West’s fifth studio album, Into The Light, was released last fall and was nominated for Best Contemporary Christian Album for the 55th Annual GRAMMY® Awards. The album features his most recent hit singles “Forgiveness” and “Hello My Name Is” (which was No. 1 on the National Christian radio chart for 17 weeks straight, officially breaking the record for the most weeks at No. 1), along with 10 other tracks inspired by 10,000 new letters submitted after West invited people to, once again, send him their stories. West was nominated and won his first American Music Award in 2013. West spent much of late 2012 and early 2013 on a pre-headlining stint of the No. 1 Tour in the World (first quarter), the Winter Jam Tour Spectacular. He wrapped 2013 with his headlining fall 2013 tour and “The Story Tour” in December. He is currently on the “Hits Deep Tour” through February.
FEATURED VIDEO
Trampolines x Neon Feather - FutureGlow
Get your video featured here