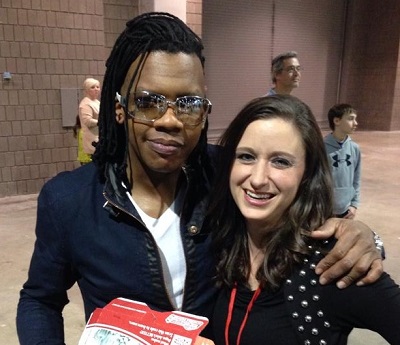 Eva Kroon Pike Debuts At Winter Jam Alongside Newsboys, Newsong And Others

“How do you describe the feeling of being in the midst of 30,000 people worshipping under one roof? To have my name included in with some of Christian music’s top names is a God-sized honor,” Pike says. “I’m still saying ‘Wow!’”

Pike is currently promoting her EP, Love Is All About You, produced by six-time Dove Award winner Don Koch (producer for Avalon, 4HIM, and many others; songwriter credits include classics “In Christ Alone,” “Adonai” and “Mercy Said No”). Her current single and music video, “Grace That Chose Me,” has been featured at various events, including the Florida Baptist Convention. Pike, who has experienced firsthand the blessings of being adopted into a loving Christian home, is an outspoken advocate for adoption. She has partnered with the Florida Baptist Children’s Home, a Christ-centered organization that provides services for abused, neglected, and orphaned children, where she helps to promote the organization’s adoption and other ministry services to hurting children and families.

Pike is scheduled to attend the 2014 National Religious Broadcasters Convention February 22-24 in Nashville.

About Eva Kroon Pike:
“Music is my passion,” says Eva Kroon Pike, who has been singing since age 3 and also plays the flute, guitar and keyboard. During her career, Pike has performed in front of thousands of people and has shared the stage with the likes of Anne Graham Lotz, Mark Harris, Babbie Mason and, most recently, Third Day. Pike’s ministry, she says, is about

“spreading the Gospel, one song at a time.” In her testimony, Pike shares her confidence that God has a plan for her life and He chose, through her adoption as an infant, a very special family for her to grow up in to learn life’s lessons. Her ministry is to point people to her loving Father who sent His Son to die so that everyone who believes in Him will live eternally. Pike states in her adoption song, “So, if I’m anything close to what I’m meant to be, I owe it to the hands of Grace that chose me.”

Her current EP, Love Is All About You, produced by veteran Christian music industry producer and songwriter Don Koch, was released in 2013. It is the singer/songwriter’s fourth recording project.

For more information about Love Is All About You and Pike, visit evakroonpike.com.