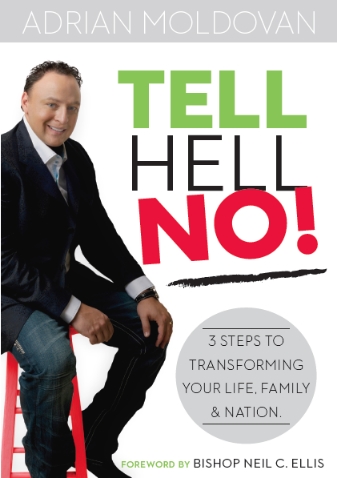 Since the October release of Evangelist Adrian Moldovan’s book debut, TELL HELL NO!, the author has been on a whirlwind media tour promoting the book from coast to coast.

In recent months, Moldovan has become a fixture on Christian television, thanks to appearances on LESEA Broadcasting’s The Harvest Show, Cornerstone Television Network’s Real Life!, CTN’s The Good Life and Homekeepers, The Word Network’s Rejoice in the Word and WATC-TV’s popular Atlanta Live. Moldovan has also been heard on popular talk radio programs such as the Marybeth Conley Show and the nationally syndicated Bill Martinez Live.

Within the pages of TELL HELL NO!, Moldovan offers biblical, practical and specific solutions to anyone who is truly seeking to achieve their purpose and destiny in life by demonstrating three effective steps to transforming their life, family and nation.

Moldovan, a fourth generational preacher, learned these principles early on, when his family was forced to flee Romania for the United States after facing religious persecution. His great-grandfather, grandfather and father were all persecuted for the cause of Christ, with his grandfather paying the ultimate price of martyrdom.

“When people ask me why I have such a passion for ministry, I have a simple answer,” says Moldovan. “I refuse to be a silent witness for my Lord and Savior. I have martyr’s blood running through my veins.”

TELL HELL NO! has a large list of notable supporters, and includes endorsements by Pat Boone, Pastor Wayne Chaney, Jr. and Bishop Neil C. Ellis who wrote the foreword.

TELL HELL NO! is available everywhere in hardcover and eBook formats, distributed by Elevate Entertainment.

For more information, visit the official website at www.tellhellno.org.

Tell Hell No! – Evangelist Adrian Moldovan from AM Ministries on Vimeo.
FEATURED VIDEO
Get your video featured here