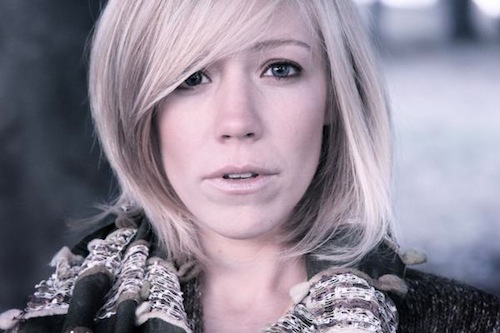 It goes without saying that the expectation surrounding singer- songwriter Ellie Holcomb’s first LP was paramount. After raising over $108,000 with the help of more than 1700 backers in a phenomenal Kickstarter campaign, the Nashville native’s debut solo album As Sure As The Sun (Sure Heart Music) is a culmination of her own efforts and the love of her fans; and she does not disappoint.

From the first note, it is evident this LP was developed out of Holcomb’s personal prayer time with the Lord. The light and hopeful tones of the title track mixed with her vocals warm your soul and make it feel at home. Singing “As sure as the sun will rise and chase away the night,” Holcomb creates a canvas with her lyrics and voice, painting a picture of the early morning that is enhanced with each of the prayer-like songs that follow.

On hearing “Marvellous Light,” it becomes clear that this track was chosen as a ‘taster’ for fans due to its promise of new things; perhaps because much of this LP was written by Holcomb when she was pregnant with her daughter. Topped with its pleasant banjo riff and the overlay of her stunning vocals, “Marvellous Light” sets the bar high for Holcomb’s future releases and those of her peers.

“Broken and Beautiful” maintains the standard, the quirky beats making it a standout as it recounts the promises God gives us about healing. “My Portion and My Strength” shows shades of Kari Jobe’s soaring vocals within Holcomb’s voice and interweaves biblical truths as she allows listeners deeper into her soul, begging God to “Help me to know that even when I lose my grip you won’t let go”.

If the first four tracks painted a beautiful sun rise, “Night Song’ establishes the brokenness that comes before its arrival. The track is simple, yet the light and shade of Holcomb’s voice and her uncanny ability to draw out the deepest yearnings of the human soul make it perhaps one of the most compelling and honest tracks on the album.

Holcomb brings a playful tone to her rendition of Corinthian 13 in “Love Never Fails,” continuing to lighten the mood with “Love Broke Through” and “Only Hope I’ve Got.” The guitar driven melody of these latter two suggest Holcomb could have transformed these tracks into something with a slight rock/pop edge, showing off her versatility and talent. “The Valley” and “Songs of Deliverance” bring the listener back to the darker shades of the sunrise Holcomb began painting, as she again calls out to God with a sincere honesty and celebrates his faithfulness.

The choice to conclude with the bluesy “I Wanna Be Free” felt somewhat unnatural, if only because Holcomb’s sudden Duffy-like tones contrasted with the lightness and piano based sound of the previous tracks. Despite this, the quality of her vocals mixed with the rounded off statement of the LORD’s faithfulness make this an enjoyable track and finishes the album on a high.

The stunning vocal control and truthful lyrics found on As Sure As The Sun firmly establish Ellie Holcomb as a force within the Christian music industry. Each track draws listeners further into the presence of God and the hints of versatility within the LP suggest a brilliance in Holcomb that we hope to see much more of in the future. Her debut LP As Sure As The Sun releases tomorrow and is well worth a purchase.