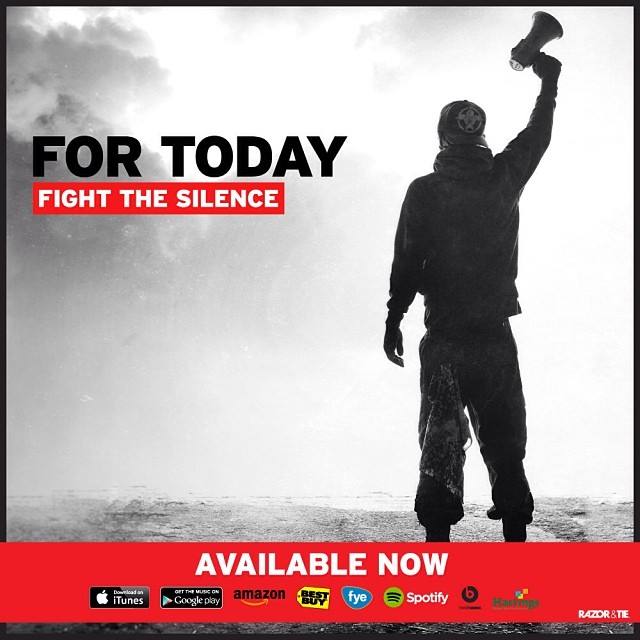 For Today “Fight The Silence” With Rocking New Album

For Today is a five piece Metalcore band from Sioux City, Iowa, who formed in 2005. The group have been a power house since their first release Ekklesia in 2008. The band’s message, sound, and popularity have matured and grown since that release, and all that is emphasized by their most recent release Fight the Silence.

Fight the Silence takes everything the band has done so far and put it all together with some fresh ideas. The album starts out hard with the back to back power of “Molotov” and title track “Fight the Silence” and the lyrical themes of both set the tone for the album. “Molotov” is a track for “our generation,” it’s a war cry calling us to start a revolution and sets the album’s tone as both an uplifting yet sober one. Those two elements are further presented with the album’s title track. The band touches on many of the world’s biggest atrocities in “Fight the Silence” such as slavery, “As I scream to see the freedom they deserve”, poverty, “Birth bringing on poverty…”, brokenness, abuse, and exploitation, just to name a few. The album talks about more than just observations though. In both “Fight the Silence” and “Pariah” the group talks about fighting just as much as they do social issues. “Pariah” talks heavily about idolatry and spiritual warfare, while “Fight the Silence” talks more about fighting for the defenseless and those in this world who can’t stand up for themselves. And all of that is only the first three tracks of the album! Musically, the album takes its stylization from the Breaker and Immortal periods of the bands history. The band uses breakdowns, hardcore offbeat structures, and the band’s signature melodic vocal styles coupled with lead vocalist Mattie Montgomery’s harsh tones to project their messages to the masses.

For Today, spearheaded by Montgomery, is one of the strongest examples of what a band, not just a metal band, should be in the music business today, where the words are the focal point and the music is just a means to convey it. Fight the Silence is one of the group’s strongest releases taking all they’ve learned in their nine years as a band and bringing it all together in one heck of an album. For Today’s Fight the Silence is for fans of earlier As I Lay Dying, Still Remains, and Underoath and easily deserves a 4/5. You can check out the music video for the album’s title track below.

Fight the Silence is available now via all major marketplace and digital retailers, which include iTunes and Amazon.