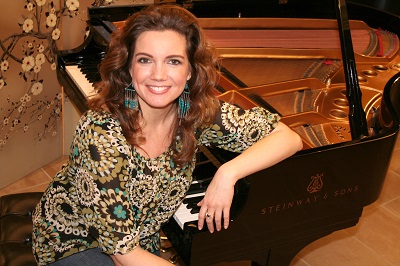 “When You Were Jesus To Me,” the latest single from Dove Award winner Cheri Keaggy is being released today to Christian radio. The single, the third from Keaggy’s current CD, So I Can Tell, is being played at Soft AC/Inspirational-formatted Christian radio stations.

The song was written several years ago, according to Keaggy, during a particularly difficult time in her life, “I was completely burdened by the brokenness in my marriage, but was able to attend my home church on Easter Sunday,” says Keaggy. “Easter is usually such a celebratory time when we remember our Risen Lord, but as we were asked to stand for worship, I couldn’t even get out of my chair. I was overcome with grief and the tears began to flow. I looked up at my friend who had walked with me in the trenches and said, ‘I can’t worship.’ And I’ll never forget what she said to me in that moment: ‘Cheri, it’s O.K. to receive.‘

“She gave me permission to be in a heap of tears and to just sit and allow God to minister to me,” Keaggy says. “She was Jesus to me that day.”

A few years later, Keaggy recalls being with that same friend in the same church. This time, it was her friend who was struggling with tears as she grieved for a wayward son.

“I couldn’t help but lean over to say, ‘A wise woman once said to me, it’s O.K. to receive.’ She smiled and nodded and we both felt a little lighter in that moment,” Keaggy says. “Sometimes we’re on the receiving end and other times God calls us to be Jesus to someone else and it’s a beautiful thing.”

“When You Were Jesus To Me” follows the release of the title track, “So I Can Tell,” and “There Will Be One Day,” with both songs charting on Billboard and CMW and spending a combined 35 weeks on the charts.
To celebrate the new single release, Keaggy is a featured guest this week on CCM Retro Radio’s show, “Her Greatest Songs And the Stories Behind Them.” The Internet radio show airs between 11 a.m. and 2 p.m. C.T. today, 8 p.m. to midnight C.T. Thursday, and 7 a.m. to 11 a.m. C.T. Saturday. To listen to Keaggy’s feature, visit ccmclassic.com/Cheri Keaggy.

Cheri Keaggy began her career as a worship leader at a small church in Southern California before recording her debut album on Sparrow Records, Child of the Father, in 1994. Honored with a Dove Award nomination for New Artist of the Year, Keaggy has gone on to record seven additional albums, resulting in nine No. 1 songs, three Dove Award nominations and a Dove Award win. After more than two decades in music, her ministry has expanded to include speaking engagements as well.

Keaggy’s latest release, So I Can Tell, which was released in 2012 on her Psalm 91 record label, is Keaggy’s first CD since her independent 2007 release, Because He First Loved Us.

Under the guidance of Gospel Music Hall of Famer and legendary guitarist Phil Keaggy, Cheri Keaggy called on the combined talents of Scott Dente and Ken Lewis from Global Genius Productions to produce So I Can Tell. The combination of rich, acoustic sounds with Cheri Keaggy’s signature plaintive vocals and searingly honest lyrics has resulted in a project that confronts life’s realities, even when filled with despair, and offers listeners the way to navigate through the challenges to a place of hope through Christ.

Penned following the end of her nearly 23-year marriage to her high school sweetheart, So I Can Tell is a testimony of God’s goodness in the midst of pain and suffering. Like a modern day psalmist, Keaggy’s lyrics express grief, loneliness, and God’s comfort in the contemporary hymns “Bind Me To You,” “There Will Be One Day” and the arresting “Hello, God.” She echoes the apostle Paul in the memorable piano ballad “To Live is Christ” and celebrates Christ’s provision in the ukulele-based crowd favorite “Air, Food, and Water.”

Through an accessible folk-pop presentation, the album leaves listeners with a renewed sense that God is with us, no matter what. So I Can Tell is filled with the radio-ready songs for which Keaggy is known and loved. Her lush vocals lovingly caress piano ballads like the title cut and the haunting “When You Were Jesus To Me.” Her voice takes on a lilting quality in the hope-infused “Starting a New Year Today,” written on the one-year anniversary of her divorce. As an added bonus, guitar maestro Phil Keaggy closes the album with the peace-evoking benediction “Postlude: Invitation to Hope.”