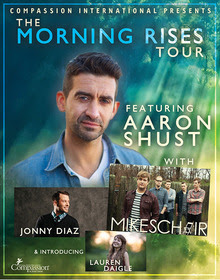 Shust will be touring in support of his current album, Morning Rises, produced by Dove Award winner Ed Cash (Chris Tomlin, Bebo Norman, Matthew West). Morning Rises released last summer to critical acclaim and features the hit songs “God of Brilliant Lights,” “No One Higher” and “Cornerstone.” Tickets for most dates on The Morning Rises Tour are on sale now, and a special VIP package is available at select shows, which includes premium seating and a pre-show Q&A with the artists. For the most up-to-date info and to purchase tickets, visit www.aaronshust.com.

The Morning Rises Tour is presented by Compassion International (www.compassion.com), the world’s leading authority in child sponsorship. Compassion revolutionized the fight against global poverty by equipping the Church to develop children out of poverty to become responsible and fulfilled Christian adults. Founded in 1952, Compassion now partners with more than 6,000 Christian churches in 26 countries to release more than 1.4 million babies, children and students from poverty.

ABOUT MIKESCHAIR
The sound of MIKESCHAIR demands attention. The strong delivery of their self-titled debut albumMIKESCHAIR and their follow up A Beautiful Life on CURB Records both set out to entertain as well as inspire those who listen. Their unique pop sound mixed with rock guitars, electronic textures, and bass grooves blended with catchy, anthemic, sing-along choruses compel you to step up emotionally and spiritually. Their music inspires action to change the world through love. Hailing from Belmont University in Nashville, Tenn., MIKESCHAIR continues to maintain their heart for missions to work and be involved with international relief agencies such as Food for the Hungry and Buckner International, organizations that help at-risk orphans. The band is currently gearing up for the release of its third studio album, All Or Nothing, slated to drop on April 1, 2014. For more information, visit www.mikeschair.com.

ABOUT JONNY DIAZ
Jonny Diaz began his music career by leading worship for a youth group in Lakeland, FL, and released his first independent project in 2003.  Two more independent albums followed before Diaz signed with INO Records in 2008 and released his first major label national debut, More Beautiful You in 2009.  The title track reached No. 1 on Billboard’s AC Indicator chart, No. 2 on Hot Christian Songs chart and lead to strong reviews that included Christian Manifesto describing Diaz’s music as “stellar acoustic pop.”  Another INO album followed, Jonny Diaz, which led to three more singles before Diaz departed from the label.  An active touring artist, Diaz has shared the stage with such notable Christian acts as Building 429, Matthew West, Steven Curtis Chapman, MercyMe and Bebo Norman.  For more information on Diaz please visit online atwww.jonnydiaz.com.
ABOUT LAUREN DAIGLE:
Singer/songwriter Lauren Daigle recently signed with Centricity Music and is set to release her debut project in 2014. Daigle hails from Lafayette, LA where she got her start in entertainment by appearing as a camel at 3 years old in a church play. That unique launch on stage led to Daigle becoming an “American Idol” contender in 2010 and 2012. Centricity Music discovered Daigle’s incredible vocal talent at a Seattle artist retreat in 2012. Daigle was a last minute stand-in for the lead singer of another band when the singer became ill, and the entire Centricity staff was very impressed with Daigle’s vocals. From there, Daigle was asked to sing background vocals on Jason Gray’s hit single, “Nothing Is Wasted,” and then joined Gray on his Christmas Stories Tour this past December.  For further updates on Daigle please visitwww.laurendaigle.com.
FEATURED VIDEO
Trampolines x Neon Feather - FutureGlow
Get your video featured here