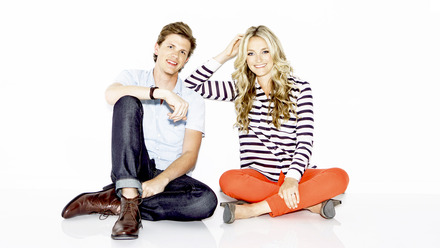 Produced by Ben Glover, David Garcia, Ed Cash and Matt Bronleewee, City Harbor is being touted as “engaging,” “comforting,” and “impressive.” Along with numerous album reviews, the duo is featured in such outlets as Rhapsody, Youthwalk, Christian Retailing, HomeLife, Crosswalk, FCA’s Sharing The Victory, and are the Artist Spotlight at TheSoundOpinion.com. They are also featured in the upcoming issue of CCM as well as this month’s featured artist on LouderThanTheMusic.

To promote their debut album last week, City Harbor held a live album release event on street date with HearItFirst.com (view the event here). They also made a few radio stops followed up with area concerts, hitting such markets as WMHK in Columbia, SC and the Family Life Network in upstate New York. The photo to the right is from the WMHK concert event.

What are people saying about the music of City Harbor? Below are just a few comments about Robby Earle and Molly Reed and their stunning and “authentic” debut:
“The production quality is superior, the harmonies are ever so tight, singable melodies, lyrics that draw you into worship, and an all around exceptional debut album. This Nashville-based duo is definitely one to watch.” – WorshipLeader.com
_____________________________
“[Molly and Robby] focus on uplifting and honest lyrics while presenting their songs in a tightly wrapped alternative pop/indie sound…Lead single, ‘Come However You Are,’ exemplifies catchy hooks with their message of giving all their burdens to God and encouraging listeners to come just as they are to Him.”  JesusFreakHideout.com
_____________________________
“Debuting duo City Harbor gives new perspective, encouragement and a refreshing sound to a weary heart.” – CMAddict.com
_____________________________
“With an impressive debut, City Harbor lives up to their goal of drawing listeners to a safe haven where peace and rest are possible….This album will press the reset button on your thinking and remind you that God’s arms are always open.”  ChristianMusicReview.org
_____________________________
“This…album is sure to connect with all listeners who like catchy songs filled with truth and yearning for God. Robby Earle and Molly Reed invite you into their songs in an authentic and relatable way.” Behind The Song with Kevin Davis/NRT
_____________________________
ABOUT CITY HARBOR:
The moniker City Harbor is quite the fit for this duo’s blend of organic and harmonic pop. With songs sharing about real-life issues, such as living out our faith in such a complex world, the words “City Harbor” represent not only what Earle and Reed hope their music is for the listener, a shelter from the storm, but are also inspired by Jesus’s words in Matthew 11:28—“Come to Me all who are weary, and I will give you rest.”
Their first single, “Come However You Are,” is currently climbing the charts at radio. At press time the song is No. 23 at AC Indicator and No. 27 at National Christian Audience.
The music of City Harbor is also featured on two WOW projects. “Come However You Are” is on the new WOW Hits 2014 compilation CD, while “It’s The Most Wonderful Time of the Year” was featured on the WOW Christmas 2013, Deluxe Edition.
Reed and Earle have already toured wtih Francesca Battistelli, Amy Grant and appeared at last year’s Night Of Joy. This past Christmas season, City Harbor was part of the “It’s Christmas Tour” with MIKESCHAIR and Finding Favor. This Spring will take the duo on the road opening for Sidewalk Prophets. Tour dates are listed below.
“This is an exciting season for City Harbor, and we’re excited to share the core of who we are by encouraging people to go to Jesus in whatever shape they’re in,” Reed exclaims. “Come to God and receive His peace, love, grace and rest. That’s the heartbeat of our message, a resounding reminder that God is always there.”