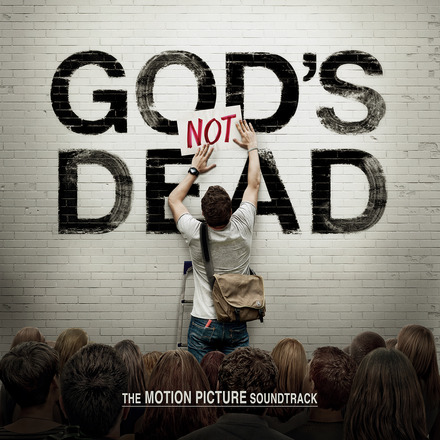 Inpop Records will provide the soundtrack to one of this year’s most anticipated new films, Pure Flix Entertainment’s GOD’S NOT DEAD. The CD, featuring tracks from Newsboys, Superchick, JJ Weeks Band, Jimmy Needham, Stellar Kart, and Tricia, among others, releases March 4.

Taking its name from award-winning group Newsboys’ hit single “God’s Not Dead,” the Pure Flix movie follows college freshman Josh Wheaton who is challenged by his atheist philosophy professor to provide evidence of God’s existence to his skeptical classmates.

Supporting the impressive cast is an equally talented music line-up (tracklist below). The project’s debut single, from popular actor/artist Shane Harper, “Hold You Up” is currently going for adds at Christian AC, CHR, and Hot AC formats. The song is already being played by Air1 Radio Network and The Fish Los Angeles. Additional singles “This is The Time” and “What I Know” are to follow.

“This project is a wonderful opportunity for the label and we are thrilled with the early success of Shane’s single,” says Mark Lusk, President/General Manager, Inpop Records. “To combine music from some of the most high-profile Christian artists with the movie will help to drive the message of the film, and the exposure will be extensive with a massive marketing campaign for both projects. We are honored to have Inpop Records partner with Pure Flix Entertainment for such an important venture.”

God’s Not Dead-The Motion Picture Soundtrack will also be promoted by means of a “What I Know” music video with movie clips, a social media push to more than 1.4 million fans as well as exposure exceeding 5,000,000 impressions via inclusion in movie ads and trailers. Furthermore, GOD’S NOT DEAD is the title sponsor of Winter Jam 2014.

For more information, visit: www.godsnotdeadthemovie.com. The trailer can also be viewed below.

“Hold You Up” – Shane Harper

“The King Is Coming” – Newsboys

“This Is The Time” – Superchick

“Ones and Zeroes” – Stellar Kart

“Save a Life” – Manic Drive

“Save Us”- JJ Weeks Band

About Inpop Records:
Inpop Records is an independent Christian music label based in Nashville, TN. Established in 1999, Inpop has been home to some of the best-known bands in Christian music. Distributed by Capitol Christian Distribution, Inpop Records has become one of the top-selling independent labels within the industry, having established a reputation for seeking out the best artists in emerging talent and for expanding the Christian music marketplace with sound and ideas. Inpop artists have scored numerous No. 1 radio hits, earned multiple awards, nominations and achieved recognition around the world. Inpop’s current roster includes Superchick, Mat Kearney, Stellar Kart, JJ Weeks Band, Tricia, Salvador, Jaci Velasquez, and Manic Drive. For more information, visit: www.inpop.com.
FEATURED VIDEO
Get your video featured here