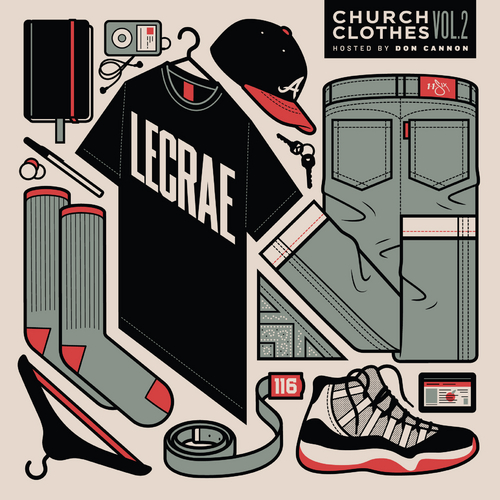 When Lecrae’s Church Clothes 2 dropped, it seemed like an eternity since the explosive Church Clothes mixtape was released, although, in reality, it was only 18 months later.  Church Clothes 2 picks up where the aforementioned left off, continuing to explore multiple styles of delivery for his thought provoking messages.

One thing is for sure, Lecrae has people talking, and one who has unashamedly accepted God’s calling to spread the word can only hope for just that, people talking about what he has to say.  The fact that so many people are discussing a mixtape is that much more impressive. The challenge Christian artists continuously face is whether they are Christian enough for some listeners, or too Christian for others.  Lecrae has long held the stance that he doesn’t care to address either issue, nor apologize to anyone with either of those views. As in previous efforts, he is quick to discount the label of being a “gospel rapper” and this seems to be the major point of discontent for most who critique Lecrae’s works.  In listening to his music however, he never denies his faith, nor discounts the importance of God in his life.  Lecrae actually has the gall to admit that he is a sinner, a fact that some critics seem to find unbecoming of a Christian artist, especially with the level of notoriety that Lecrae finds himself with.  While Church Clothes 2 may not be a full fledged sermon, it is a highly entertaining album filled with positive messages.  Lecrae has long been known as a versatile rapper and this album portrays that well.

Unafraid to share the spotlight, the album features spots by fellow 116 Clique member Andy Mineo and his trademark rapid delivery, Tedashii, Derek Minor, W.La.K., Propaganda and even Paul Wall among others. After the first or even second and third listening, one may be left feeling dizzy and confused.  Even though Church Clothes 2 flows nicely, it is not a progression of songs in the sense of one story being told from beginning to end.  Lecrae instead takes 16 different opportunities to provoke thought while entertaining the listener.

Possibly the most unique effort on the album is “Devil in Disguise” where Lecrae lets a blues riff lead the way through a tale of one struggling through his challenges of giving his life over to God.  As a perfect example of the variety the album offers, the very next track, “The Fever,” threatens to destroy sub woofers with Papa San delivering a reggae styled chorus and Andy Mineo showing with his lightning fast delivery.  “Round of Applause” shows up a few tracks later to bring the rattle back while telling a story of overcoming the odds.

“Sell Out” makes up for being the shortest track on the album, by hitting the listener right between the eyes with the idea of the false glitz and glamor of celebrity status. “I’m Turnt” has a decidedly more poppy feel as do the tracks “If I Die Tonight,” “Lost My Way” and “Hang On,” although all three carry on with the thought provoking themes throughout Church Clothes 2.

Lecrae’s stance of resisting labels is worthy of applause.  Critics seem to be missing the point with the purpose of artists like Lecrae who have been called to deliver a message.  The point is not about proving one’s level of faith or their ability to live a sin free life.  Church Clothes 2 is absolutely worth a listen.  There is enough diversity for any fan of hip hop to pull at least a couple of tracks to drop into a play list, if not the entire mixtape.  Fans of Lecrae will surely find this album worthy of sticking on repeat.  Better yet, share the album with someone looking for answers, music is a fabulous mechanism for exposure to the truth, a responsibility we all share. You can grab a free download of it by clicking below.