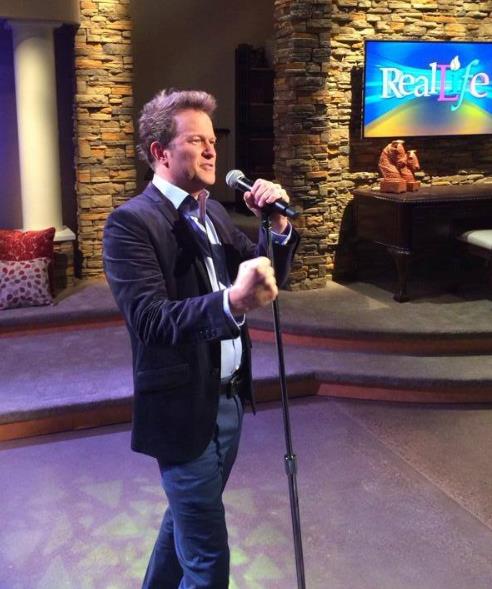 “Your River’s Wide Enough,” the new single from singer/songwriter, worship leader and author Clay Crosse, is currently being played at INSPO/Soft AC and AC-formatted Christian radio stations. The song, written by Bernie Herms and Jennie Lee Riddle, is the third single from Crosse’s current CD, reDedication.

“I’m so happy that we’re releasing ‘Your River’s Wide Enough’ to Christian radio,” says Crosse. “This song felt strong during every phase of planning and recording, and I’m excited to see how God will use it to touch listeners.”

The new single was penned by two of the industry’s veteran songwriters. Bernie Herms, a popular Dove Award-winning songwriter and producer, has numerous chart-topping singles to his credit, including Casting Crowns’ “Praise You In This Storm,” “East To West” and “Until The Whole World Hears.” Dove Award winner Jennie Lee Riddle, known for writing the popular praise song “Revelation Song,” co-wrote “Your River’s Wide Enough” with Herms.

Crosse has been criss-crossing the U.S. in recent months in support of reDedication, his 10th career album. The 10-song project, from CCM Forever and Elevate Entertainment, is available at all major Christian retailers.

About reDedication:
“I experienced a personal, formal rededication of my life to Christ in 1998,” Clay Crosse says regarding the title of his new CD. “And that decision has been working in me ever since. Every year there is a growing realization that there are still miles to go in my relationship with Christ. That’s a great thing. Fifteen years later, that realization still resonates with me in a richer, even more meaningful way than it did when I first rededicated my life to Christ.”
With the release of reDedication, Crosse returns with a project of songs worthy of those that first caused the industry to take note. Two singles from the CD currently are being played at Christian radio: “Working On A Building,” featuring Christian music legend Russ Russ Taff and American Idol finalist Melinda Doolittle, at AC and Gospel radio formats; and “When I Lift My Hands” at Soft AC and Inspirational radio formats. “When I Lift My Hands” recently hit No. 22 on the Billboard Christian Soft AC chart.

Finger-on-the-pulse songwriting, pristine instrumentation and spot-on production by long-time industry vet Regie Hamm, combine with Clay Crosse’s signature vocals to make reDedication one of the finest projects of his career.

“Rededication, as a spiritual event, is something that has strongly impacted not only my own life, but the life of my entire family,” Crosse says. “It’s my prayer that reDedication, the album, will encourage believers to re-examine their own lives and help lead them into a deeper walk with Christ.”

About Clay Crosse:
Clay Crosse was a FedEx courier for six years before making his recording career debut on Reunion Records in 1994, the same year he took home a Dove Award for Best New Artist. His first record, My Place Is With You, yielded his signature song “I Surrender All.” Including his latest CD, reDedication, Crosse’s discography includes six studio albums, three compilation albums and one live worship album, but the multi-talented performer doesn’t stop there.

He is also a gifted author. Crosse’s most recent book, Dashboard Jesus: Distinctive Reminders for Distracted Men, a humorous and compassionate guide for men of all ages, released in March 2013.

Crosse and his wife, Renee, who were high school sweethearts, live in Bentonville, Ark., where Clay Crosse serves as worship pastor at First Baptist Church. They have four children: Shelby, 20; Savannah, 16; Garrett, 14; and Sophie, 8.

In 2001, Clay and Renee Crosse founded Holy Homes Ministries, encouraging Christian families to come back to a close relationship with Christ and encouraging non-Christian families to come to know Christ. They travel the country leading marriage enrichment events along with Clay Crosse’s singing schedule. They are also spokespeople for Holt International Adoption and have adopted twice from China (Sophie in 2005 and Garrett in 2007).