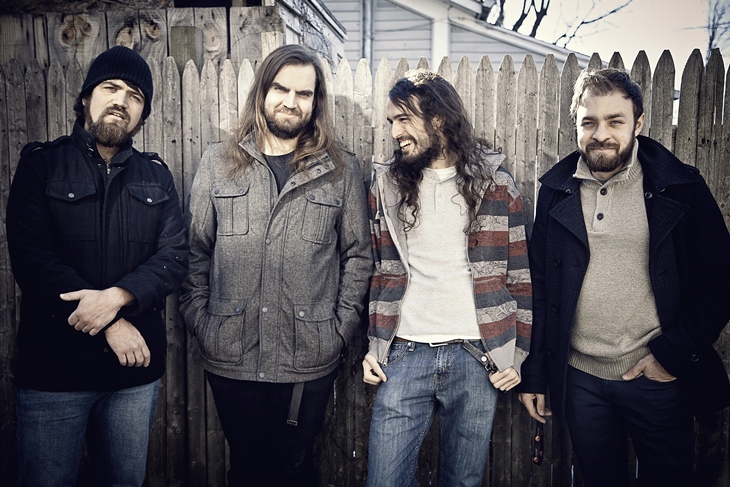 Vereor Deus Non Dogma. 4 simple words, yet the meaning is so profound. The Latin phrase translates to “Fear God, Not Dogma,” and it is also the title for the debut 8-song EP from an up and coming hard rock quartet based out of Troy, Ohio. Ever since premiering their single, “Eternal Respiration,” back in October of 2012, Mayfly has played just about as many shows shows as possible around the area. This constant dedication to their music has earned them regional recognition and a record deal with on-the-rise indie label Voluminous Records. Mayfly is the epitome of the blue collar rocker, and after hearing Vereor Deus Non Dogma, it appears that their hard work may start paying them dividends.

The EP begins with “Choice,” an eerie intro revolving around a dissonant guitar chord and vocalist Jared Lacey’s spoken word lines before “Choice” transitions straight into the first full track on the EP, “Infidel Castro.” This song is where the listener is introduced to Mayfly’s signature sound, which the band has dubbed as “recycled nu-metal.” Lacey alternates between singing and “yelling” during the verses, and then shifts his focus on more melody during the chorus where he enlists guest vocalist Betsi Ford for some extra help. The gang vocals towards the end really add to the song which, overall, is a solid tune that gives the listener a preview of what is to come on Vereor Deus Non Dogma.

The Ohio natives turn it up a notch in the following track as “Jihad” makes its entrance with a siren, which soon fades away. What’s left is a pummeling guitar pattern backed by a pounding rhythm line. Although Lacey sings for the vast majority of “Jihad,” he does have a few spoken lines and some guest help from former Staple vocalist Darin Keim. “Jihad” tops its predecessor because there’s a striking balance between melody and aggression, whereas “Infidel Castro” has both of these qualities, just not organized as cohesively as in “Jihad.”

“Jihad” exits in the same manner that it entered, and the next thing the listener hears is a breathing sound layered over the main riff of “Eternal Respiration.” Lacey then comes in with the split vocal delivery that he seems to have perfected (the part-rapped, part-sung approach). The chorus is another solid display of heavy instrumentation, in addition to Lacey’s harmonizing with his sister Rachel, the featured guest on this song. The pseudo-breakdown in the bridge is what takes “Eternal Respiration” over the top and makes it the strongest song on the EP.

“Screaming Whispers” is a brief interlude that leads straight into “Skylights,” the driving rock chart set in a fast ¾. “Skylights” is not only the fastest song on the EP, but it’s probably also the most aggressive, full of guttural vocals and quick-paced riffing.  Ironically the most aggressive song on the EP is followed by “Fiasco,” a “ballad” of sorts. Lacey focuses solely on singing and the band takes it down a couple of notches while still keeping their intensity. The “oohs” layered under the main vocal line add quite a bit of power to the chorus. If there is any beautiful moment on Vereor Deus Non Dogma, it’s definitely “Fiasco.” All of their previous songs are primarily nu metal, while “Fiasco” is much more rock-oriented. Because of this, it is definitely the most accessible track, and it would fit well on many radio formats.

The final song on the EP is “Eternal Respiration,” remixed by up and coming electronic artist Jessy “JESS” Ferguson. Remixes typically get a bad rap because they often fail to meet the standards set by the original. However, this is not the case with JESS’ Remix, which is very industrial in nature. He does a phenomenal job of using the electronics to enhance the sound and give the already stellar track a fresh new twist. That being said, the band may have made a questionable decision by including the remix on the EP, as it just doesn’t feel right and, in a way, kind of ruins the flow of the album. This is really the only problem with the remix though.

Although Vereor Deus Non Dogma has its strengths as well as its flaws, the effort is a solid debut from a group that certainly won’t be slowing down anytime soon. The chemistry between the band members is there, and they have quite a bit of potential. It will be interesting to see how their future unfolds.

Stay up to date with Mayfly by “liking” them on Facebook and following them on Twitter, and make sure you “Get Plugged In!” to us if you haven’t already done so! We will be posting the album buy links on release day so be sure to check back then!

You can check out the album teaser below.