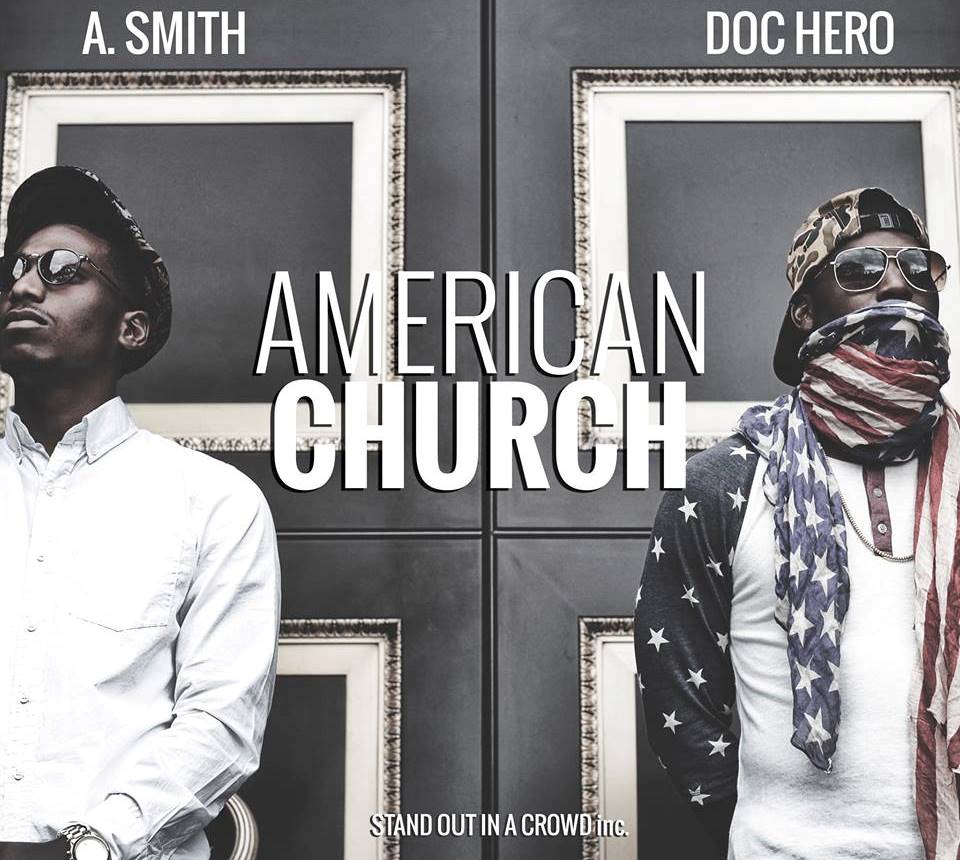 A. Smith and Doc Hero Hold up a Mirror with Free American Church Album

With sponsorship from non-profit Stand Out In A Crowd Inc, Doc Hero and A. Smith have combined forces to release a free collaboration project entitled American Church.  This five track project sounds neither like a free album nor one comprised of two emcees relatively new to creating music together, but both scenarios are in fact the case.

The first of the two emcees, Doc Hero, cut his teeth in the CHH scene with the group Lost and Found.  He has also released a free mixtape, Faith over Fear and is preparing to release his debut album The World Needs a Hero.  Heros’ collaboration partner, A. Smith aka The Dreamr, also hails from a group setting, formerly being a member of Heaven’s Finest.  Smith himself has a series of mixtapes, The DreamR Vision 1, the DreamR Vision 2, and The DreamR Lucid Dreams.  Like Doc, Smith is also currently finalizing work on a highly anticipated new album.

The duo kick off American Church with the opening track entitled “King Me.”  The initial track finds the duo addressing the issue of Christians focusing more on the issues and sins of others instead of working to address the issues in their own lives.  The track with the recurring chorus “You should run for the Governor of your own life, before trying to point the finger, judge your own life” is essentially a 2014 take on John 8:7.  The snappy hi-hat and organ accompaniment to the thumping bass are the glass of water that will make the “I’m a hypocrite” pill easier to swallow.

Adopting a more serene meditation inducing backdrop, “Big Dreams” exposes the struggle so many Christians face trying toeconcile the existence of the Almighty with the imperfections of the world.  While not the most dance inducing track, the instrumentation are a good fit for the lyrical tone.

“Pontius Pilot” picks up the pace with a looped piano riff.  Background vocals by Lauren Ray accompany DreamR and Doc who trade bars back and forth pleading with the listener to continue to seek growth in ones’ relationship with Christ each and every day.

Maintaining the uptempo production of the previous track, “Medieval Era” addresses a similar theme to “King Me” this time however focusing more on the claim of living a life of Christianity vs. truly following the road map laid out by God.

Featuring an on again off again guitar laced beat and lyrical assistance from Boots, the final track which shares the album’s name, “American Church” essentially plays as a recap to the previous tracks.  Doc and DreamR also shed light on the tendency to focus more on the church as a physical establishment vs. the intended idea of the church being a representation of one family of Christ followers.  As with the previous tracks, the duo tag in and out as if they have been doing this for years.

American Church checks in and out in less than 18 minutes and 30 seconds, threatening to leave the listener holding a spoon, staring into the empty container of ice cream wishing there were still more left. Crisp production, pristine lyrical tag teaming and thought provoking subject matter make this a no brainer of a FREE download, so here’s the link: http://www.thedreamrent.com/. Hopefully the future holds more collaborations between these two talented emcees…

You can view two music videos from the project here.