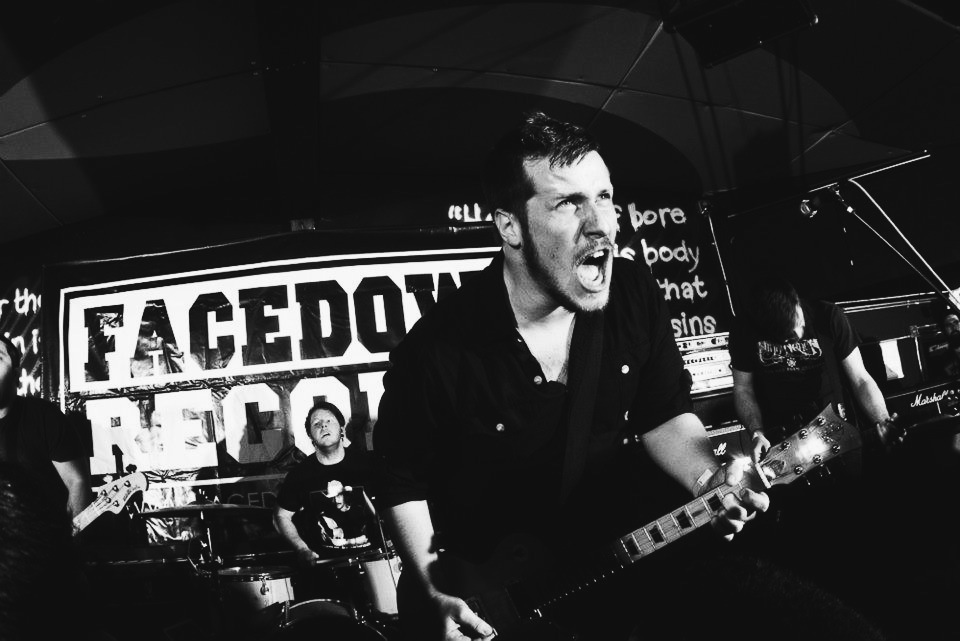 Everything In Slow Motion Unfurls Its Wings With “Phoenix” Album

December was an amazing month for the heavier side of Christian music with two exceptional releases from two bands on Facedown Records. Best known for his work in the former three piece Ambient Rock/Hardcore band Hands, Shane Ochsner has returned with his solo project Everything In Slow Motion. Ochsner has created something unique and beautiful that is without a doubt one of the best releases of last year. Phoenix takes the listener on a ride that will surely be remembered for years to come.

Phoenix is heavily geared around the theme of overcoming addiction. The first track “Get Out” brings this theme to the table almost immediately with its rocking chorus, “Get out. I don’t want it. Light it up and let it burn to the ground. Get out. I can feel it. I’ll rise above the ashes.” The track is heavy and carries similar likeness to Shane’s previous band “Hands” which is sure to delight the fans of his previous work. The heaviness continues with “Speak,” which has the welcome surprise of guest vocals from Blindside front man Christian Lindskog. “Speak” is definitely one of the standout tracks off the album and a strong contender for song of 2013. The track was released before the album with a behind the scenes music video.

Two other tracks that share the main theme of addiction are “Poison” and “Most Days.” Both songs play well off each other as they take the journey from being addicted to being freed by calling out to God. “There’s a light within all of this darkness. As the poison runs through my veins, Oh God. I would give anything, just to rest in your arms,” is an excerpt of the hard hitting lyrics contained within “Poison.” The first single off Phoenix, “Most Days,” has a quiet and beautiful tone that builds to the heavy signature sound of Hands and the lyrical theme continues with “Here I am I’m letting go of this tonight. I can’t do this on my own. Only you can save me.”

Depending on your personal tastes, tracks 5 and 9 may or may not be somewhat forgettable. There’s nothing actually wrong with them, far from it in fact, they just don’t reflect the same amount of uniqueness that the rest of Phoenix displays. “You Are” features some great worship lyrics that, as usual, are sung fantastically, “I’m a song that only you could sing. Let my words be more than nothing. Beautiful, you are,” and “Remember No More also has some nice guitars and vocals on it but, again, they both fail to add much to the album as a whole.

Advancing with the greatness of this album though is “Numbers.” Although it’s slower in pace, this track gives a nice refreshing pace to the album and still features heavy elements with the bass and guitars. “The Fool” is an intense song that shows the passion and energy Shane puts into the lyrics and vocals and it’s awesome to hear him both sing and scream these lyrics, “And even though you claim his name, it’s not enough to kill the pain. So keep your hands to yourself, I’ll bet you’ve never met a sinner like me.”

Both “Come Down” and “Proxima” are standout tracks that you do not want to miss. “Come Down” is one of the heaviest on Phoenix and, while the whole song is incredible, the vocals once again need a special mention as Shane puts in some epic melodies while he sings “After all that’s been said, I should know by now. That life’s a whisper. The answers may not be found.” Alongside the great melodies comes the strong harmonies in “Proxima.” The track features guest vocalist Holly Ann as she brings much welcomed female vocals into the mix. Again the lyrics are great in this closing song, ““Oh, hold my soul. If I should come undone, hold my soul.” It would definitely be nice to hear more of Holly Ann’s vocals featured in future EISM albums.

Although it doesn’t affect the final rating of the album, the epic album artwork that makes up the cover of Phoenix has to be mentioned. The album art adds something special and gives Phoenix a strong feeling of originality. I believe that cover art is actually majorly important to an album, and this artwork done by Dave Quiggle paints a portion of the canvas that the music then fills with its wonder and grace.

Phoenix is nearly a perfect album with its only downfalls being the two tracks that can’t quite match the excellence of the rest of it. It’s rare that a piece as good as this comes along, and with the departure of Hands a couple of years ago, fans of Hands will surely be impressed with what has arrived in its place. If you haven’t heard Everything In Slow Motion before, take a listen to the song “Speak” below. It’s doubtful that many won’t fall in love with Phoenix at first sight, it’s just a matter of getting the word about it out there.

Be sure to buy this amazing album from these, and other fine retailers:
iTunes | AmazonMP3

To hear a sample of what is to be expected from Phoenix you can watch the music video for the song “Speak” featuring Christian Lindskog below.

Also be sure to check out the other amazing album which released the same day, Behold by My Epic. For the fans of the more mellow tracks of this album, you will surely love that album as well. You can check out our review of it here.