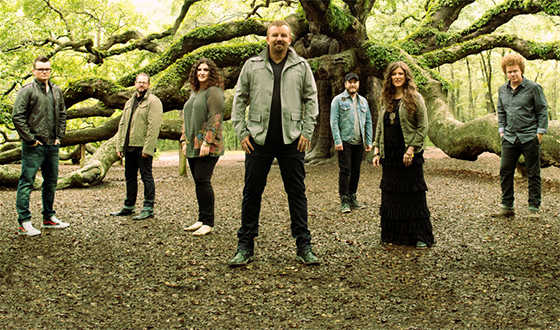 Echoing in the title track to Casting Crowns‘ seventh studio record – out today, January 28 – are the lyrics: “It’s time for us to more than just survive, we were made to Thrive.” An understatement for beloved multi-platinum selling group who holds the position as Billboard’s top selling act in Christian music since 2007 and wrapped up 2013 with three Grammy nods, a RIAA 2x multi-Platinum certification, multiple RIAA Gold certifications and more. Casting Crowns begins the year with the release of Thrive, their new album that includes their infectious No. 2 radio single, “All You Ever Wanted.” The new record debuted today at No. 2 on the overall iTunes® album chart and marks the band’s latest studio project in over two years, following the success of Come to the Well which debuted at No. 2 on the Billboard Top 200. Leading up to today, Casting Crowns streamed the record exclusively on iTunes®, adding them into a select group of Christian acts to have their album on First Play.

After kicking off street week with a CD release party at their home church, Eagles Landing, Casting Crowns shows no signs of slowing down. The band continued the celebration with a surprise visit to Dallas last Thursday for their first ever “Secret Show.” The event was at capacity and treated guests with a special live run through of the new record. This Friday, January 31, Casting Crowns will perform the record’s power ballad, “Broken Together” on Chicago’s nationally syndicated WGN Morning News and on Saturday, February 8th, they will perform on the highly rated morning program, FOX & FRIENDS.

On Thursday, February 6, Casting Crowns will host a special Livestream Event LIVE from New York, giving fans an up-close and personal interaction the band. The event includes a live performance and fan chat with Casting Crowns.

Fans aren’t the only ones buzzing with excitement about Thrive. The stream of media continues to pile in on street day with an overflow of high praises. Check out just a few of the glowing remarks on Thrive:

“The group’s seventh studio album opens with its anthemic title track, a cheerleader-worthy number that is rousing radio gold…Mark Hall & Co. managed to make an album that will satisfy longtime fans while throwing in a few surprises for the skeptics – no easy feat.”
– Rhapsody

“Casting Crowns showcases its immense range, delivering Christian testimony through an array of styles, each marked by the bands’ contemplative luster.”
– iTunes

“The chart-topping Georgia septet forges ahead with another top quality set of thoughtful pop, rock and worship songs, each one inspiring both weighed down and fired up believers.”
– Crosswalk.com

“These are some of the best songs I’ve heard…you’ll want to replay this album over and over. Thrive is sure to be one of the year’s best.”
– NewReleaseTuesday.com

“This is a collection of songs that aim for the heart; Hall and his team has never been more transparent and compelling than this their seventh time charm.”
– Hallels.com

Forming more than a decade ago, Casting Crowns’ message of hope has resonated with people around the globe, with total album sales surpassing 8 million. Following the release of their record is Mark Hall’s newest book on Zondervan, “Thrive – Digging Deep, Reaching Out” available on February 11. To pre-order the book, click here.

Next month Casting Crowns will embark on their national tour, “The Thrive Tour,” which features Laura Story and for KING & COUNTRY. For a complete list of tour dates, visit: https://www.castingcrowns.com/tour.

Buy Thrive from these and many other retailers:
iTunes | Amazon