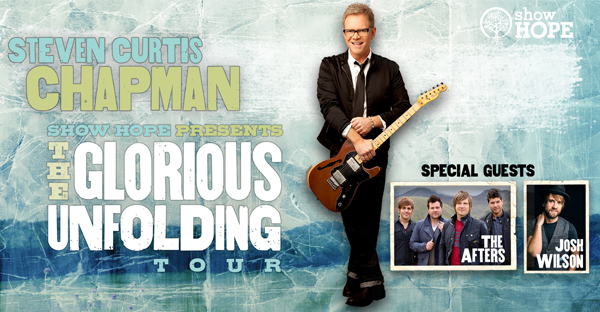 Five-time GRAMMY® winner and highly acclaimed singer-songwriter Steven Curtis Chapman, who was GRAMMY® nominated again this year for his No. 1 single “Love Take Me Over,” announces the spring leg of his very successful “The Glorious Unfolding Tour.”

The lineup for the second leg of the tour, which recorded nearly 20 sell-outs on the fall run, includes special guests The Afters and Josh Wilson. The tour continues Chapman’s support of his recent album release, The Glorious Unfolding and Show Hope, an organization at the forefront of the movement to care for orphans, returns as presenting tour sponsor.

“‘The Glorious Unfolding Tour’ has been an incredible experience so far!” said Steven Curtis Chapman. “But we didn’t get everywhere we wanted to take this new music, so we’re headed out again. I’m so honored to still be getting to do this and I look forward to seeing all of our friends that can make it out to the concerts.”

“Steven is a timeless professional with an incredible heart on and off stage. ‘The Glorious Unfolding Tour’ was one of the best tours of last year,” said Mike Alley, Director of 48Live Productions.

“If you’re a fan of anyone on the roster, The Glorious Unfolding Tour is a show you won’t want to let pass you by,” longtime industry tastemaker, John DiBiase raves. “Steven is still going strong musically and as a performer decades after getting his start, and the mix of new and classic SCC tunes in the same setting is just proof of it.”

Joining Steven is the energetic pop rock band, The Afters. The foursome brings a history of No. 1 hits, including their most recent chart topper, the infectious debut single, “Every Good Thing.” The band’s second single, “Broken Hallelujah,” from their newest album, Life Is Beautiful, is already climbing the charts as well. Concertgoers will also enjoy Josh Wilson. The pop singer-songwriter’s latest release, Carry Me, features radio hits “Carry Me” and the newest single, “Pushing Back The Dark.” Wilson’s proficiency with multiple instruments and the honesty of his lyrics will delight crowds each night.

*Dates are subject to change, see StevenCurtisChapman.com for most up to date tour info.

About Steven Curtis Chapman:
Steven Curtis Chapman has sold nearly eleven million records including two RIAA certified platinum albums and eight RIAA certified gold albums. Along with his five GRAMMY® awards and 17 nominations, Chapman has won an American Music Award, has recorded 48 No. 1 U.S. radio hits and been awarded 58 Dove Awards, more than any other artist to date. Since his recording career began in 1987, Chapman has recorded 17 projects. He has performed at the White House and has appeared on multiple national programs via CBS, NBC, ABC, CNN, MSNBC, CMT, FOX News, the Hallmark Channel and E!, including Good Morning America, Larry King Live, Fox & Friends, Huckabee, CBS Sunday Morning, The Tonight Show with Jay Leno and more. StevenCurtisChapman.com

About The Afters:
The Afters propelled into the national spotlight with their smash debut, I Wish We All Could Win. The project spawned the swirling, melodic hit “Beautiful Love,” which was the most downloaded track of 2006 on the iTunes® Inspirational charts. The song was selected as the theme track for MTV’s “8th and Ocean” and led to the band’s first mtvU award. Their sophomore release, Never Going Back To OK debuted in the Top 50 on the Billboard Top 200 and proved to be a sensation on the silver screen with spots on “Grey’s Anatomy,” “Dr. Phil” and “Rachael Ray.” The band’s third record Light Up the Sky continued the momentum, bolstering two No. 1 radio hits and songs on NBC’s “The Biggest Loser” and ABC’s “You Deserve It.” Leading up to the release of their fourth album this past April, the project’s title track – “Life is Beautiful” – was the featured song in the theatrical release of “October Baby.” Life is Beautiful also includes the No. 1 radio hit, “Every Good Thing” and “Broken Hallelujah,” along with a bevy of TV-ready tracks already seen on “So You Think You Can Dance?,” “America’s Got Talent” and “The Vineyard.” Throughout their career, The Afters have also had their music featured in the movie “New Year’s Eve,” MTV’s “The Hills” and Lifetime’s “Army Wives” and have appeared in Billboard Magazine, “E! News,” Rolling Stone, Seventeen.com, TV Guide and more. TheAfters.com

About Josh Wilson:
Josh Wilson grew up the son of a preacher in Lubbock, Texas. He released his critically acclaimed major label debut, Trying to Fit the Ocean in a Cup, in 2008 with the media hailing Wilson as “the future of Christian pop.” His sophomore effort, Life Is Not A Snapshot, and a compilation self-titled record later, he released his third studio album See You in 2011 and his most recent, Carry Me, released in April of 2013 to huge acclaim, touting the album as “rich with truth” and “authentic.”

This multi-talented singer, instrumentalist and storyteller is consistently known for being one of the top pop songwriters in the industry while his albums consistently pop up on Year-End Top Ten lists. To date, he has sold more 225,000 in career album sales and has achieved numerous No. 1 hits. Wilson has toured with such artists as Steven Curtis Chapman, Matthew West, Big Daddy Weave, Third Day, and has performed for thousands at many of our industry’s biggest events like Disney’s Night Of Joy, Celebrate Freedom and more. JoshWilsonMusic.com

About Show Hope:
A ministry founded in 2003 by Steven Curtis Chapman and his wife Mary Beth to help care for the millions of orphans around the world, Show Hope™ helps to provide waiting orphans with forever families by giving adoption aid grants to adoptive families. In just ten years, Show Hope is an internationally recognized voice for orphan advocacy and has given more than 4,000 financial grants, affecting the lives of children from 50+ different countries, including the U.S. In addition to giving financial grants, Show Hope also empowers families, churches and communities with adoption and orphan care resources and advocacy efforts to change the world for orphans.

Show Hope has remarkable worldwide impact by providing for orphans with special needs through its Special Care Centers, mission trips to China and Haiti, Red Bus Project tours with awareness reach to college students, conferences and resources that equip foster and adoptive families, and new artists and advocates programs. Show Hope celebrated an incredible ten years in ministry in 2013 and looks ahead to an even brighter future. ShowHope.org