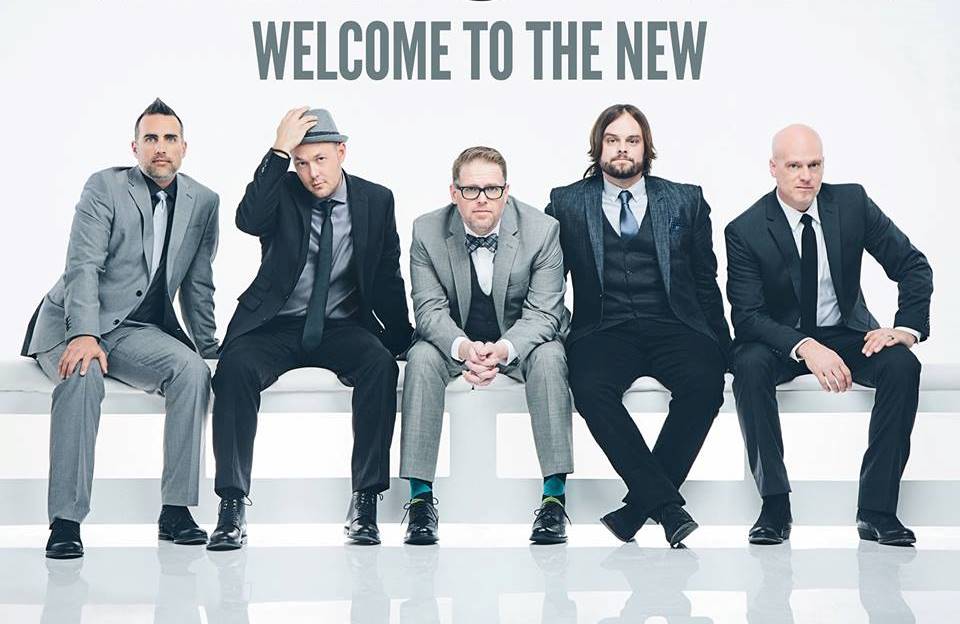 Ending 2013 on a high note with the release of their energetic single, “Shake,” Grammy-nominated, American Music Award and Dove Award winning band MercyMe carries the enthusiasm into 2014 as they announce their eighth studio album Welcome To The New, available April 8, 2014 from Fair Trade. Collaborating with producers David Garcia and Ben Glover (TobyMac, Mandisa), Welcome To The New represents a shift in tone for the multi-platinum selling group.

“At 41-years-old, I feel like I am just starting to grasp who I am in Christ,” says lead singer Bart Millard. “I grew up in a somewhat legalistic environment where the harder you try, the better God likes you. It was about two years ago a dear friend of mine reminded me I cannot do enough great things to make Christ love me more than He already does. Not to mention, I can’t sabotage this relationship and be taken from His hand. In other words, all the work was truly done on the cross and I cannot mess it up! This is not a new season in my life, it is my life! Everything has changed from this point on, and I want to tell this to anyone who will listen and be the first to welcome them to the new!”

Last fall, MercyMe released “Shake,” their first single from Welcome To The New. The song was an instant hit with radio audiences, gaining adds from 75 stations including K-LOVE, Air 1, Salem Music Network, KLTY/Dallas and more, while shooting up into the Top 20 on the Billboard National Christian Audience Chart.

The single’s impressive momentum has translated well for the “Shake” music video. Filmed on the downtown streets of Huntsville, Ala. with dancers from the North Alabama Dance Center and over 100 local extras, the high-energy, choreographed music video has been viewed nearly 700,000 times over several video platforms. Fans of the band have been buzzing about the video, using the hashtag “#MMShake” to share their own videos and responses via Facebook, Twitter and Instagram.

The album will be available for pre-order at Lifeway, Family Christian Stores and other participating retailers on January 28, as well as iTunes® on February 18.

About MercyMe:
Since their debut in 2001, GRAMMY®-nominated, American Music Award and multiple Dove Award winners MercyMe have sold over 6 million units in CD and DVD sales, garnered 25 No. 1 multi-format Christian radio singles and four consecutive mainstream radio hits with “I Can Only Imagine,” (No. 4 AC/Top 25 on Top 40/Hot AC), “Here With Me” (No. 4 AC), “Homesick” (Top 10 AC), and “So Long Self.” In 2009, Billboard named MercyMe’s “Word Of God Speak” the No. 1 Song of The Decade and the group the No. 1 Christian Songs Artist of the Decade, with an additional No. 1 as the Christian AC Song Artist of The Decade as one of the industry’s most notable talents. MercyMe made history as “I Can Only Imagine” surpassed 1 million digital downloads, making it the first song in Christian music to go platinum in the digital domain. MercyMe has sold out venues across the nation, including Radio City Music Hall, and has appeared on The Tonight Show, CNN, Fox New Channel’s Fox & Friends, ABC News, CBS This Morning and in the pages of Entertainment Weekly, The New York Times, USA Today, Billboard and more. Their eighth studio album, Welcome To The New, will be available on April 8, 2014.

Buy “Shake” from these, and other digital retailers:
iTunes | AmazonMP3