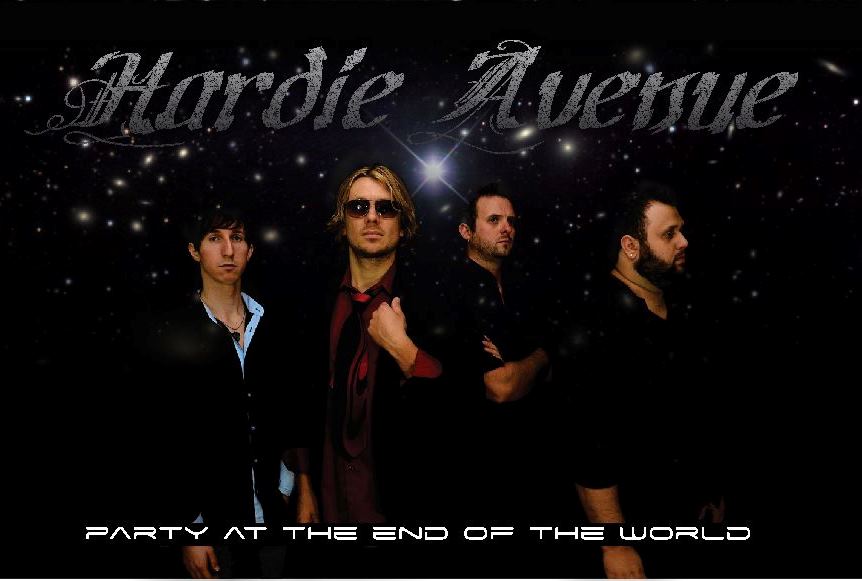 Blending dance vibes, rock-rap lyrics, and soft ballads the Tulsa based Hardie Avenue independently released their latest album Party At The End Of The World in September last year. Kicking off the record is the title-track, and from the get go the synths and electro-heartbeat is strong. Lead Singer Yuri Mayba blends styles as he raps the verses and rockfully belts the chorus, a formula followed throughout most of the album. The lyrics embrace the return of Christ, and boast of the joyous festivities that will eternally overcome heaven and earth.

With “City of Rain” the music turns to the rockier side of things as the lyrics chant an encouraging message of hope, “Get up, stand up, run towards the light.” The next track, “I Will Die By Your Side,” slows the tempo down and lyrically is one of the strongest tracks of the record,“I will die by your side, you are my beautiful one, we will walk through this life, like two roses in the garden of love.”

“Forgive them for me” is a line from “I Am Dying For You,” another dance-rock tune but with intense lyrics as the track takes on Jesus’ point of view as he is dying on the cross. “You Told Me I Am Your Son” is an upbeat ballad that expresses deep gratitude and appreciation for God’s love. Taking the lead on vocals on the next piece, Yuri’s daughter delivers a solid performance in “No Fear.” Following the ‘rap the verses, sing the chorus’ pattern this is a pump up track boasting of the confidence one should have in God.

The album then takes a different turn with “Now I Say” as the intro features pure piano for a good thirty-seconds before the synths kick in. This ballad continues the overall theme of the album of humbly exalting God’s love and willingness to never give up on us. “At The End” lays a solid beat with a hip-hop vibe as the verses explain how we often look for something to fill our emptiness, but the chorus shows that the only answer is Jesus, “He gave us his life never ending, his hands bleed for you and for me.”

“Help Us” takes on the conflicts that can sadly take place between different churches and denominations, and is a prayer that Jesus will “help us to love one another.” Rounding out the album in pure ballad form is “To Love Like You,” and with only an acoustic guitar, piano, and a small dose of synth strings, the final song embraces a softer sound.

Overall the album is less about the partying at the end of the world, as one might expect from the album’s name, but more about appreciating Jesus and inviting the world to turn towards His love. In previous records the band has embraced both alternative and harder rock styles with guitar riffs and double-bass pedaled drums, so it was interesting for the band to incorporate some dance synth melodies into this release. Although the end result was not perfect, it was still a great effort and Party At The End Of The World will certainly be a very good addition to music collections across the world. Let’s hope it’s a stepping stone that will bring forth a bombastic dance rock record in the near future.

You can check out the music video for “Party At the End Of The World” below which features a surprise verse from rapper 5ive.

About Hardie Avenue:
Headed by Yuri Mayba, the band originated in 2005 from Seattle, WA. After a few independent records Yuri ended up in Tulsa, OK where he had to find a whole new line-up. The band, now consisting of Yuri, Dave Allie, Steve Allie, and Josh Harms then signed with Tate Records and released Beautiful Words, which garnered them national attention and the chance to open for many big acts, including Disciple, Hawk Nelson, and Family Force 5.

Buy Party At The End Of The World from these, and other digital retailers:
iTunes | AmazonMP3 | Google Play