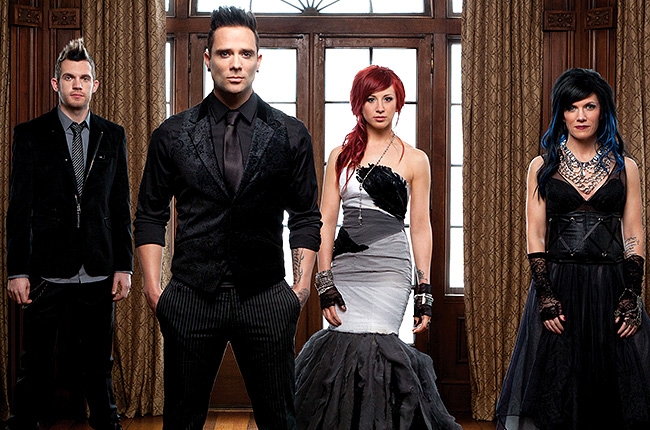 Skillet Return To U.S. Soil After European Tour With Another No.1 Song

Dec 20, 2013
Platinum and Grammy®-nominated rockers Skillet are back on U.S. soil after firmly making their mark overseas following a massive European fall tour with Nickelback where crowds demanded encores, and six back-to-back sold out headline shows in Russia, including over 6,000 screaming fans in Moscow. Just as the band boarded flights from Kiev, Ukraine to the U.S. they heard the news that their current single from their best-seller Rise (Atlantic/Word), “Not Gonna Die” held onto the No. 1 spot on the Christian Rock charts for the third week, is Top 20 and climbing on mainstream Active Rock (their sixth consecutive Active Rock hit), and their Hot AC single, “Fire and Fury” is Top 10.After such an extended time of international touring, Skillet is looking forward to co-headlining The Roadshow, which kicks off January 9, 2014 in Sacramento, CA., and have also just announced they’ll continue to tour with co-headliners Third Day on 20 more domestic dates throughout the spring. Starting February 27 in Toledo, OH., Skillet and Third Day will hit the road with an all star line-up including Mandisa, Brandon Heath, Jamie Grace, Peter Furler and We As Human.

Connect with Skillet:
Facebook | Twitter | Website | YouTube
About Skillet:
Over the course of the past few years, GRAMMY® nominated and platinum selling rock band Skillet has sold more than two million units in the U.S., racked up more than 150 million YouTube views and amassed a diehard following (dubbed Panheads) whose members number over four million on Facebook alone. Their 2013 release RISE debuted at No. 4 on the Billboard 200 and No. 1 on the Billboard Rock and Christian charts, which led to a No. 1 radio hit for “American Noise” and “Sick Of It.” RISE also gave Skillet their late night television debut on CONAN.

RISE follows the band’s 2009 blockbuster, Awake, which was recently certified platinum for sales in excess of one million copies in the U.S and debuted at No. 2 on the Billboard 200. In addition, the record hit No. 1 on the iTunes® Top Albums Chart, garnered three Billboard Music Awards and spawned four hit singles including the No. 1 Active Rock smash and gold-certified “Awake & Alive,” the gold-certified “Hero,” “It’s Not Me It’s You” and the platinum-certified “Monster.” “Monster” lived up to its name, selling more than a million copies and hitting Top 5 at Active Rock radio (the first in a string of multiple Top 5 active rock hits), while its companion video has generated over 47 million YouTube views. Skillet was the only active rock band to achieve RIAA Platinum Certification in 2012, and was one of only three rock bands (the other two being Mumford & Sons and The Black Keys) to strike platinum in 2012. Skillet is made up of John Cooper, Korey Cooper, Jen Ledger and Seth Morrison.