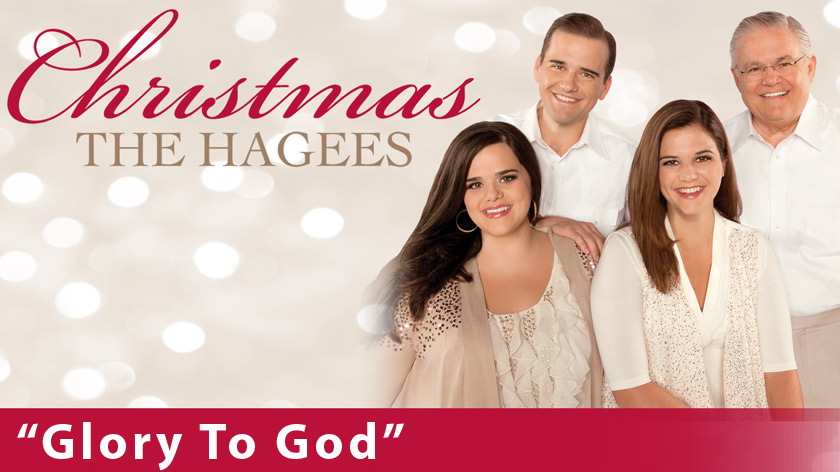 Christmas, the holiday debut from one of Gospel music’s most renowned family groups, The Hagees, is now available from Difference Media/Capitol Christian Distribution.

The project’s debut single, “Glory To God,” is an original track penned by Pastor Matthew Hagee and Aaron Wilburn and can be heard here. Inspired by the angels’ proclamation of the birth of Christ to the shepherds, the song represents a timeless theme The Hagees reflect throughout the album.

“The first Christmas morning in Bethlehem’s manger was the birth of Hope itself for a world enslaved by the power of sin,” says Pastor Matthew Hagee. “The birth of Jesus Christ brought spiritual and civil liberty to all the world.”

A highlight of Christmas is The Hagees’ rendition of the timeless classic “O Holy Night,” featuring group founder and family patriarch Pastor John Hagee. “Having the opportunity to sing anything with him becomes a moment, because my father grew up singing with his parents,” adds Pastor Matthew Hagee.

Christmas also includes the modern favorite “A Baby Changes Everything,” sung by Sandy Parker. “I was actually pregnant and nobody knew but my husband and me,” Parker shares of her first performance of the song several years ago. “It was super emotional for me, and as a result, when I sang it, I had that breaking moment where you don’t know if you’re singing or crying.”

In promotion of Christmas, Pastor John Hagee will be featured Thanksgiving Day on “The Mike Huckabee Show,” broadcast on more than 200 radio stations in 44 states via Cumulus Media Networks. Hagee’s interview is slated to air at approximately 2:30 pm ET.

A world-renowned evangelist and best-selling author, Pastor John Hagee is founder and senior pastor of Cornerstone Church in San Antonio, Texas. A non-denominational evangelical church with more than 20,000 active members, Cornerstone is home to John Hagee Ministries, which telecasts Pastor Hagee’s radio and television teachings throughout America and to 245 countries around the globe. The ministry also operates GETV, a 24/7 online television and video on-demand broadcast of sermons and original programming (getv.org).