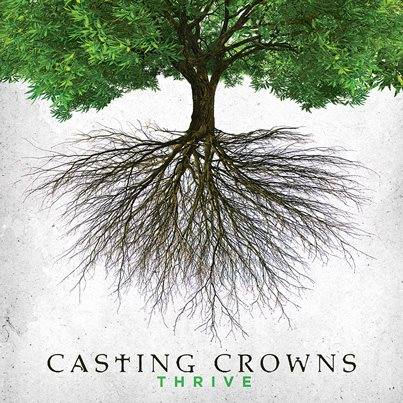 Multi-platinum selling group Casting Crowns has experienced a landmark year with three Grammy® nominations, a RIAA 2x multi-Platinum certification, multiple RIAA Gold certifications and more. Since forming more than a decade ago, Casting Crowns’ message of hope has resonated with people around the globe, with total album sales surpassing 8 million. Moving into an exciting new season in 2014, the band reveals its seventh studio record, Thrive, out January 28, 2014, with Mark Hall’s newest book “Thrive – Digging Deep, Reaching Out” releasing on February 11, 2014. In support of the new record, Casting Crowns has also announced its upcoming national tour, “The Thrive Tour,” which will feature Laura Story and For King & Country and will kick off in Lexington, Ky. on February 20, 2014.

The forthcoming album, Thrive, comes more than two years since its acclaimed album Come to the Well and includes the new lead single “All You’ve Ever Wanted,” which can be heard below. Pre-sale options are available now at select digital and physical retailers with a Deluxe Edition of the record exclusively on CastingCrowns.com. Accompanying the anticipated record is Casting Crowns lead singer, Mark Hall’s newest book “Thrive – Digging Deep, Reaching Out” through Zondervan. The book hits retailers on February 11, 2014 and includes powerful stories and teaching for those looking to take the next step of faith.

Thrive includes 12 brand new tracks from Casting Crowns, adding to its esteemed list of hits and nine No. 1 singles. Working again with veteran industry producer Mark Miller, half of the record follows the theme of “Reaching Out” with songs like the upbeat, folk anthem and title track “Thrive.” The remaining half of the record centers on the theme of “Digging Deep” with songs like the haunting and vulnerable ballad “Broken Together” that encourages couples in whatever season they are in, as well as the reflective lead single “All You’ve Ever Wanted,” which you can hear below.

The same theme continues to cultivate in the Zondervan release of Mark Hall’s latest book. “Thrive – Digging Deep, Reaching Out” is Hall’s fourth book to date and discusses the critical inner challenge to ourselves, that we can do more than just survive life – we can thrive. Each chapter threads together this impactful message, adding the band’s signature style of telling stories with powerful tools for application.

“The idea of Thrive came out of our student ministry and what we’ve been teaching for years on what a believer looks like,” says Casting lead singer, Mark Hall. “This record and book is an effort to draw a picture of what a believer would look like if they dug into their roots and understood God and themselves more. We must first learn who God is and who we are. With that, half of our record is all about learning who God is and who you are. The other half is about how that works out. How are you going to get out there and let God live His life through you?”