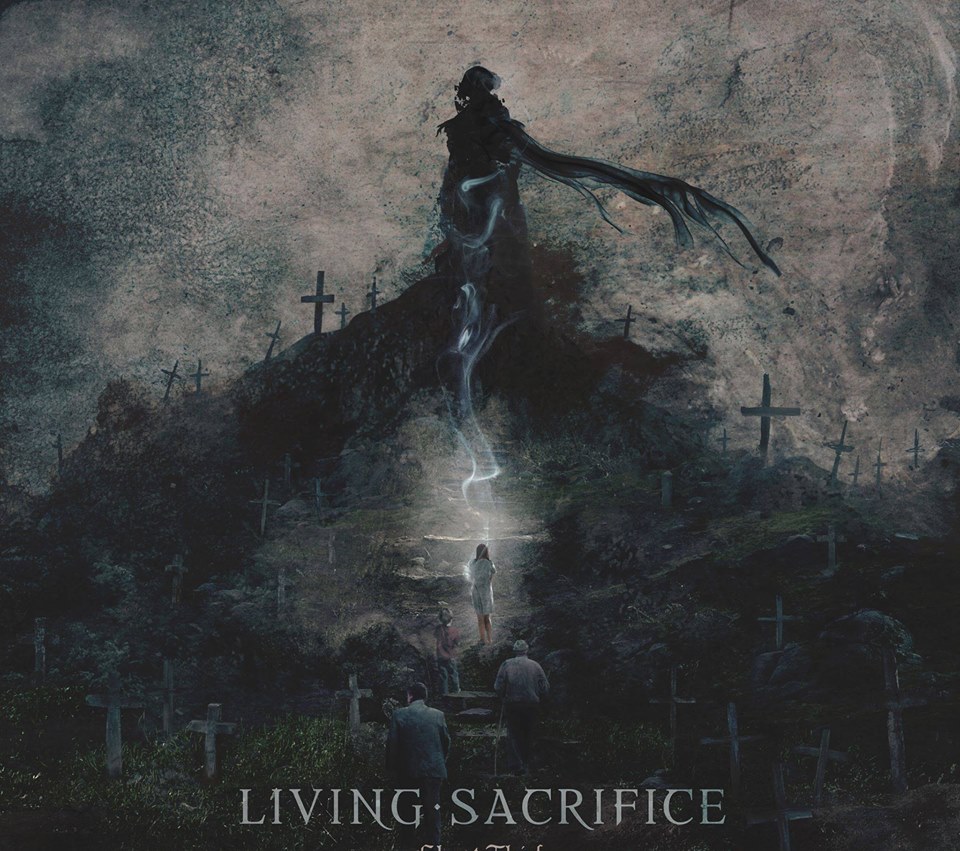 For twenty years Living Sacrifice has been gracing the metal world with their music. Few bands have been able to achieve such a unique sound as the metal veterans have and they continue to further that sound even more through their most recent release Ghost Thief which released today.

Living Sacrifice’s history stretches back to 1989, but their self-titled first full-length wasn’t released until 1991 on R.E.X Records. The band continued to bring the devastation throughout the 90’s with releases like Inhabit in 1994 and their Reborn album in 1997. Reborn marked a big step for the band as it was their first album on Solid State Records. The band would then release two more albums on Solid State, The Hammering Process and Conceived in Fire released in 2000 and 2002 respectively, before the band would split for a five year “retirement.” The band reformed in 2008 in support of Demon Hunter’s Stronger Than Hell tour and released their first album since the split in 2010 entitled The Infinite Order. It’s now 2013 and it’s been three years since the last Living Sacrifice release, but trust us Ghost Thief is well worth the wait.

Ghost Thief comes out with a bang and delivers an early death metal flair to the album with the track “Screwtape” which effortlessly combines the raspy growls of lead singer Bruce Fitzhugh and the melodic voice of Demon Hunter front man Ryan Clark to bring you a track packed full of intensity. “Screwtape” isn’t the only track on Ghost Thief to have a guest vocalist feature on though, with the final track on the album, “Despair,” also getting the guest feature treatment, this time with Throwdown’s Dave Peters lending his vocals to great effect. For the songs in-between the opening and close of Ghost Thief there are some other noteworthy high points. For example, the title track of the album delivers some of the heaviest guitar intro work and vocal performance to be heard out of a band in some time. “The Reaping” gives the fans a brief hardcore feel to the album, an unusual twist for the band, but “Mask” gives you a healthy dose of death metal to knock you back into familiar territory.

Living Sacrifice is proving once and for all they are back with a vengeance. Ghost Thief gives you a very well rounded performance with strong musicianship, impact driven lyric delivery, and certainly tips its hat to the metal of old. Living Sacrifice is recommended for fans of Demon Hunter, Trivium, and In Flames. Ghost Thief has some repetitiveness, but that does not hinder the album at all and easily deserves a 4.5/5.

[Editor] As well as being available in stores, Ghost Thief is now available to purchase on iTunes, and all major electronic vendors:
iTunes | AmazonMP3

To connect with, and learn more about Living Sacrifice, please visit them online:
Facbook | Twitter