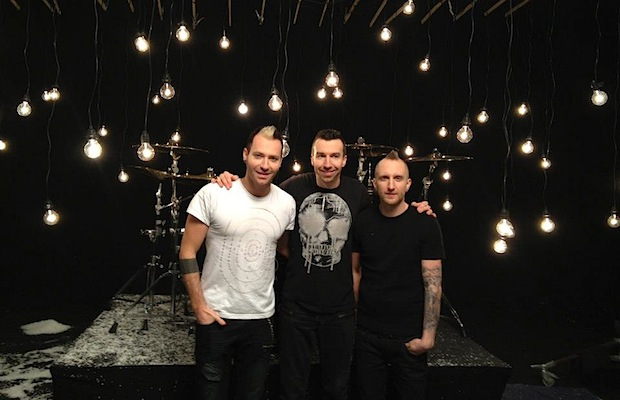 Featured on the remix album is Solomon Olds’ (Family Force 5, Newsboys) take on the adrenaline-infused Active Rock hit and No. 1 Christian radio single, “Light Up The Sky,” and title track, “The End Is Where We Begin.” Andy Hunter (The Matrix: Reloaded, The Italian Job, ABC’s Alias) shares his version of the Active Rock hit and first No. 1 Christian single from the current studio album, “War Of Change,” with additional ‘tripped out’ versions of “I Get Wicked” and “Down.” Robbie Bronnimann (Nicki Minaj, Chicane) remixes the Active Rock single “Let The Sparks Fly” along with the SiriusXM Octane Big ’Uns Countdown Top 10 single “Fly On The Wall” and hit radio single “Be Somebody,” while Steve Sidelnyk (Madonna, No Doubt, Moby) and Rob Persaud (The Bourne Legacy, Snow White and the Huntsman, The Green Hornet) tackle “We Are (Karmageddon Remix).” Portuguese musical innovator Rui Da Silva (“Touch Me”) handles the militant “Courtesy Call” and producer/songwriter Joshua Silverberg (Edison Glass, Abandon) offers an unsullied take on “So Far Gone.”

The new physical CD follows the success of Metamorphosiz: The End Remixes, Vol. 1, which not only spent time at No. 1 on the iTunes Rock Albums chart in its first week out, but further sparked ESPN2 to load up “War Of Change,” “We Are” and “Let the Sparks Fly” remix tracks for placements on its show “First Take.” Receiving similar sales success, Metamorphosiz: The End Remixes, Vol. 2 also gathers a We Love Christian Music Awards nomination for EP of the Year.  TFK received three “We Love” awards last year, including The Rockfist Award for “Best Rock/Alternative Artist/Group,” which has been renamed “The Rawkfist Award” this year in honor of TFK and the band’s song, “Rawkfist.” Everyone is invited to vote for the second annual We Love Christian Music Awards through Dec. 12 at http://www.theweloveawards.com.

THOUSAND FOOT KRUTCH decided to offer remixes from The End Is Where We Begin after the response the band received from two remix songs delivered to its fans for free via noisetrade.com and commemorating the success of album, which hit No. 14 on the Billboard Top 200, their highest charting album to date.

10)Be Somebody (The Robbie Bronnimann Mix)

Thousand Foot Krutch continues to rack up the accolades for its independently released, The End Is Where We Begin, that sparked three Active Rock radio hits, “Let The Sparks Fly,” “War of Change” and “Light Up The Sky,” with the latter two songs also hitting No. 1 Rock at Billboard Christian radio.  The album is also gathering acclaim in Europe, with the “War of Change” video being added to playlists in the UK at MTV, Kerrang! TV and Scuzz, and with features and reviews in Rock Sound, Metal Hammer, Terrorizor, Big Cheese and more.  In Germany, “War of Change” hits the Star FM Rock Top 30listener chart while Hard Rock says (translated), “Fans of the aforementioned bands [Linkin Park, Rage Against The Machine, Seether or Shinedown] should definitely check out the catchy title track, the forceful alternative rocker ‘Let The Sparks Fly,’ the powerful ‘War Of Change’ as well as the melancholy ballad ‘Be Somebody’.”  Reviews also ran in numerous German magazines, as well as in the Netherlands at Aardschok and Lords Of Metal and in the Spanish websites Todopunk, The Backstage and Zona Zero.

Following the break out success of The End Is Where We Begin, TFK released its first hits compilation, Made In Canada: The 1998-2010 Collection, Oct.15.  The new collection underscores the past hits that helped build this band into one of today’s most successful rock trios, including fan favorites and No. 1 songs, such as “Rawkfist,” “Move,” “Fire It Up,” “Phenomenon,” “Falls Apart,” “Bring Me To Life” and six more, plus two never before released tracks, “Complicate You” and “Searchlight.”

Receiving over 1,900, 5-star average customer reviews on iTunes® alone for The End Is Where We Begin, TFK has found that sometimes the best way to move forward is to go back to the basics, taking all of the raw energy and emotion of the past and channeling it into the present.   For those who’ve been following the Ontario, Canada-bred players since their formation in 1997, it’s been a continuously escalating highlight reel that includes best-selling albums, top Active Rock radio hits (including the aforementioned songs, plus the Made In Canada tracks “Fire It Up,” “Move” and “Phenomenon”), and a slew of soundtrack slots. In fact, the group has literally infiltrated every facet of pop culture, from ongoing ESPN appearances, to various NASCAR, MLB, NHL, WWE, NCAA and NFL airings (including the 2010 Super Bowl), along with the “GI Joe” movie trailer, WGN-TV’s “Smallville” and EA Sports’ NHL 2010 and 2013 video games.

All the latest tour dates and additional band information can be found at www.thousandfootkrutch.com, http://twitter.com/officialtfk and www.facebook.com/thousandfootkrutch, where the band has over 773,000 fans.