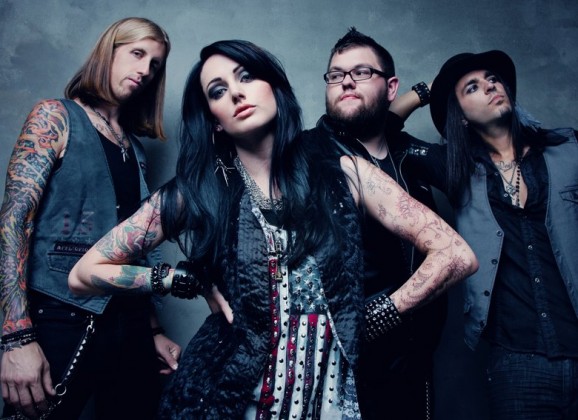 Three days ago, The Letter Black released their new music video for “Pain Killer,” the lead single off their sophomore project Rebuild which releases November 11th on Tooth and Nail Records.

As the new slightly unsettling video opens, Sarah Anthony’s voice immediately catches your attention, lifting full of emotion and anguish. However, it’s when the band starts playing that a whole different level of visual intensity kicks in as we find Anthony entrapped in a box at a bizarre carnival, where her pain is viewed, encouraged and cheered on by the crowd of masked onlookers, enjoying the spectacle of the anguish she is subjected to.

As Anthony sings “You kill my pain…in the name of Love,” it’s easy to read into the spiritual overtones throughout this video, although it is still left largely open to interpretation and is thus accessible for all audiences. There is a sense of despair as the spectators cheer on the torture, and it’s a testament to the director that her pain is felt strongly throughout.

Towards the end of the video, Anthony is freed by her band-mates (Mark Anthony, Matt Beal & Justin Brown), in a display which showcases that love truly does take away her pain. In the closing shots, the carnival host is shown enclosed in the glass box, highlighting the hopeful message that hope and love will bring about freedom and win the war over evil in the end.

The Letter Black’s lyrics have never shied away from pain, and the songs on their debut record were sometimes dark and aggressive…but were always covered with a hopefulness not often heard in music that rocks this hard. If the lead single is any indication, Rebuild is sure to take its rightful place alongside, sometime tour-mates, Skillet as one of the best rock releases this year.