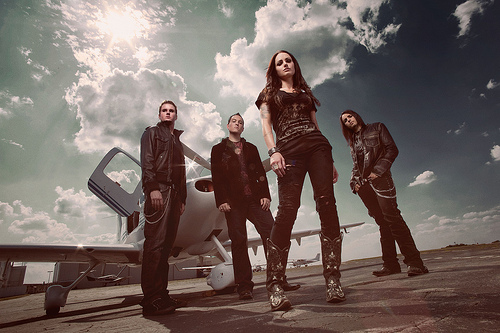 “The first time around, we were new and it was all brand new to us,” says vocalist Sarah Anthony. “We weren’t really sure what we were doing, and it was a whole new experience. This time around we were able to settle in, be more comfortable, and focus on writing songs we like, honing in on what we wanted to say.”

The Letter Black burst onto the alternative rock landscape with their EP followed by the full-length debut in 2010 – now one of label Tooth & Nail’s top selling debuts in recent memory.

“The last record was all about the healing process and being at rock bottom,” recalls Sarah. “We called this record ‘Rebuild’ because it’s all about being on the up and up from where you were. It talks about conquering things that have been hurdles in your life and just overcoming. Our whole goal as a band is to give people hope.”

The current radio single “Pain Killer,” is at Active Rock and has already been added by Sirius Octane and MusicChoice. Click here to watch the lyric video for this single.

The Letter Black has already been introducing the new music for their very loyal fanbase who have come to love the band’s explosive live show. The band has toured relentlessly since their beginnings and shared the stage with the likes of Skillet, Drowning Pool, Decyfer Down, Sevendust, P.O.D, Brian “Head” Welch, Hoobastank, Thousand Foot Krutch and Love & Death. This month they will be on tour with Pop Evil. Click here for the complete list of November dates.

About The Letter Black:
In 2009, the band debuted with their now out-of-print EP, Breaking the Silence, then followed-up with its full-length debut, Hanging On By A Thread in 2010. The Letter Black has also had radio success with four radio singles from their debut, “Best of Me” (CHR No. 17), “Hanging On By A Thread” (CHR No. 23, Rock No. 6), “Believe” (Rock No. 4) and “New Fire” (Rock No. 17). Media have also gravitated to this heavy-hitting band as they have been covered in Revolver, AOL Noisecreep and AOL RadioBlog. The band is vocalist Sarah Anthony, guitarist Mark Anthony, bassist Matt Beal and drummer Justin Brown.