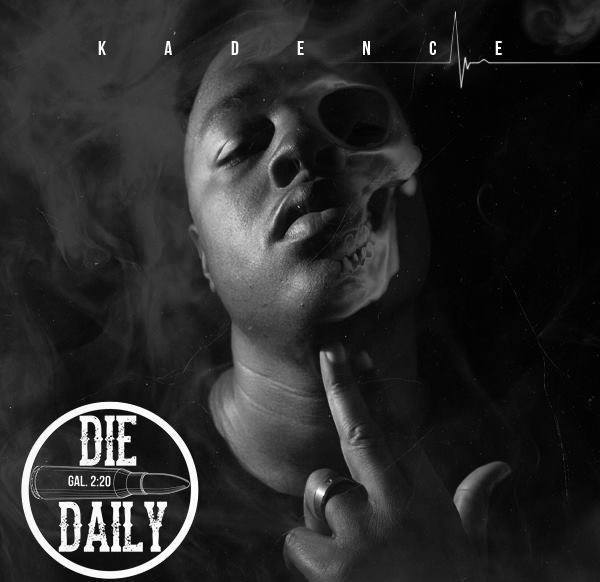 Proud Oklahoma City resident Kadence, a.k.a. “The Drumma,” blessed CHH fans with the release of his free Die Daily project at the stroke of midnight on October 31st. The mixtape/EP runs for nine tracks but makes the most of every single one of them. Kadence doesn’t waste any time in getting down to the nitty-gritty on the opening title track, where he is joined by counterparts Sean C. Johnson, Flud Cavion, and Chad Jones, all of whom shine lyrically. However, it is Kadence himself who sets the tone early in the first verse by proclaiming, “Welcome to the funeral of a mad man! Half-crazy, psychopath, need a CAT-scan. In the mirror I see my rival, but he only sees his idol. A daily fight for survival, it’s time to get suicidal!…” over the track’s creeping organs and warbling synth stabs.

The project’s single “I’m Gone” follows with percolating and buzzing synths and pounding percussion and clacking kicks. Kadence represents his hometown well with clever punch lines such as, “Yup, yup, yup, ya’ll better check my portfolio. Twelve years and I’m still spittin’ that holy smoke. Still sick on the mic, lyrical polio. And I’m from Oklahoma, grab your partner, do-si-do.” The theme of  Die Daily continues and is, perhaps, embodied by the track “Kill ‘Em” and Oklahoma is again represented well, as Dillon Chase and Marcellis team up with their fellow Oklahoman to massacre the flesh over haunting strings and chilling vocal chants. As the chorus states, this is truly “Music you can die to.”

Sito Bckwrdz tags in to make a cameo over the booming bass and cascading keys of “Not My Will.” Once again, there is a clear theme and common strain carried out through this album and this track fits right in with that concept of rejecting mammon and pursuing the spirit. The track ends on a fitting note by quoting Mark 8: 34-36. The next offering on the album features fuzzy horn synths that fade in and out, spaced-out keys, and bass that slaps. “Going Blind” waxes on about ignoring detractors and avoiding drama and strife as Kadence and Entitlement both spit nice bars, as the former drops gems like, “Church, this that tabernacle flow. Coming at ya neck, bars aimed at your clavicle. I’m tactical…fishin’ with this mic, holy mackerel!” Appropriately, he lyrically murdered that track and Entitlement’s flow seems to ride the beat organically.

“Nikes” features some crazy 808’s and a piano that swings like a pendulum. On the chorus, Kadence implores listeners to “Just do it,” in regards to walking out their faith. Once more, the emcee drops some amazing punch lines throughout. Kadence gets more introspective and tackles subjects like evangelism and conversion on “My City,” as he even divulges some of his own struggles grasping God’s word and the message of salvation.

The subject of death is brought up in a literal sense on “PDE.” The title is an acronym for People Die Everyday, and Kadence and L9 impart tales of different ways people pass away; from a drunk-driving accident, to a drive-by shooting, to domestic abuse. The chorus is melody-driven and conveys how short life is and that it can truly end at any moment. The importance here is placed on what we are pursuing in our time on this earth and the song poignantly makes its point to chase after the cross. The album wraps up with a shift in perspective, as the whole point of dying daily is revealed on “Finally Alive.” Sonically, this song also changes gears, as heavy electric guitars and claps back a beautifully sung hook by CAM and Sid Carter. The song is truly a triumphant, anthemic ballad of an outro, more than anything else. By the time the end of this well-done work is reached, it feels like more of a new beginning than anything else. It also seems like a sign of things to come for Kadence, as though he is only now just getting started.