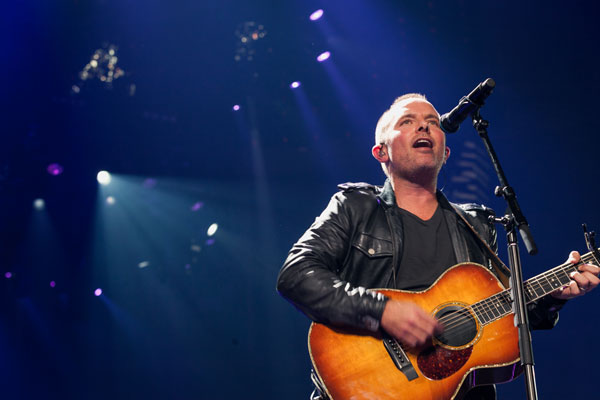 Following suit with numerous sold out performances during the spring leg of the “Burning Lights Tour,” the 22 city fall leg has just begun and has already sold out venues in New York and Chicago (his second in the Big Apple and Windy City this year), in addition to Columbus, Grand Rapids and Little Rock so far. The tour once again features friend and pastor of Passion City Church/Communicator/Passion founder, Louie Giglio.

The Burning Lights Deluxe Tour Edition CD & DVD includes the Burning Lights CD, which made history earlier this year as only the fourth Christian music album to debut at the No. 1 spot atop the Billboard 200, as well as a DVD of Tomlin’s performance before an enthusiastic crowd at Denver’s famous Red Rocks Amphitheater.

The two-disc combo debuts to much critical acclaim, with outlets like Relevant calling Tomlin “America’s most prolific worship leader,” while CCM magazine remarks that the DVD “captures that fervor and passion the way no studio recording can. The viewer doesn’t just get to see the doors of the throne room flung open; they get to enter in.” JesusFreakHideOut.com adds that it “succeeds in matching soaring tunes with the red cliffs and iconic vistas of the amphitheatre,” while LouderThanTheMusic.com lauds it as “…one of the most incredible live worship concert recordings ever made.”

Recently, Billboard.com debuted the first live music video, “Our God,” from the DVD, with CNN.com premiering the energetic live music video for “God’s Great Dance Floor.” This week Worship Leader featured the videos on their website as well, encouraging readers to catch a sneak peek in their weekly e –newsletter.

You can watch Chris Tomlin’s live performance of his incredibly popular song “Our God” here and you can watch him performing “God’s Great Dance Floor” below and you might just see him attempting to do the “running man” dance move!

About Chris Tomlin:
With nine albums, 12 No. 1 radio singles, a GRAMMY® Award and eight additional nominations, two Billboard Music Awards, 21 Dove Awards, a platinum and four gold albums to his credit, Chris Tomlin is among the most well-known and influential artists in contemporary Christian music. Referred to by Time magazine as “most likely the most often sung artist anywhere,” Tomlin also has 15 of the Top 100 CCLI songs with 4 of them being in the top 10. ASCAP’s 2007 Songwriter of the Year, Tomlin’s “How Great Is Our God” was his first No. 1 on the CCLI Top 25, moving to No. 1 after becoming one of the fasting rising modern day hymns in CCLI chart history. In addition to having sold more than 4.2 million albums and over 6 million digital tracks, Tomlin made history as his single “Jesus Messiah” (Hello Love) garnered 97 adds at radio its first week and skyrocketed to No. 1, making it the biggest ever add date in Christian radio history. In the midst of his record breaking success, and continuing his role as worship leader at Passion City Church in Atlanta, GA, Tomlin continues touring and leading at Passion Conference gatherings across the US and worldwide. His ninth studio album, Burning Lights, debuted at No. 1 atop the Billboard 200, making history as only the fourth Christian music album to do so.