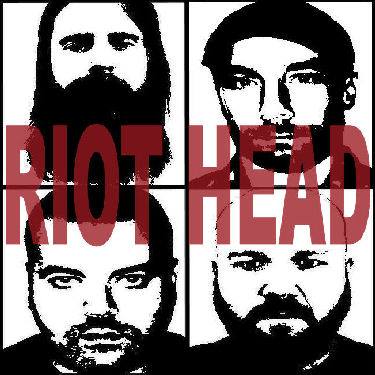 Riot Head is the moniker for a “supergroup” of sorts, having risen from the ashes of several defunct metal and hardcore bands from the late 90s and early 2000s. Featuring Adam Salaga and Sean Sundy on guitar, Matt Clark behind the drum set, and most notably, Dallas Taylor from Maylene and the Sons of Disaster and Underoath taking on vocals, this project is overflowing with all kinds of talent. Their sound harkens back to the early days of metalcore and its beginnings, showcasing a perfect blend of hardcore and metal. The four old friends formed the band in Erie, Pennsylvania, during the winter of 2012, and released their first song together back in September. The song, which is entitled “Sweet Centralia,” is available as a free download on the group’s BandCamp page.

Since then Riot Head has released another song, “ The Red Eye,” also available for free download on their BandCamp page. Stay up to date with everything regarding Riot Head over at their Facebook page.
[adkingpro type=”post-banner-468×60″]
FEATURED VIDEO
Get your video featured here