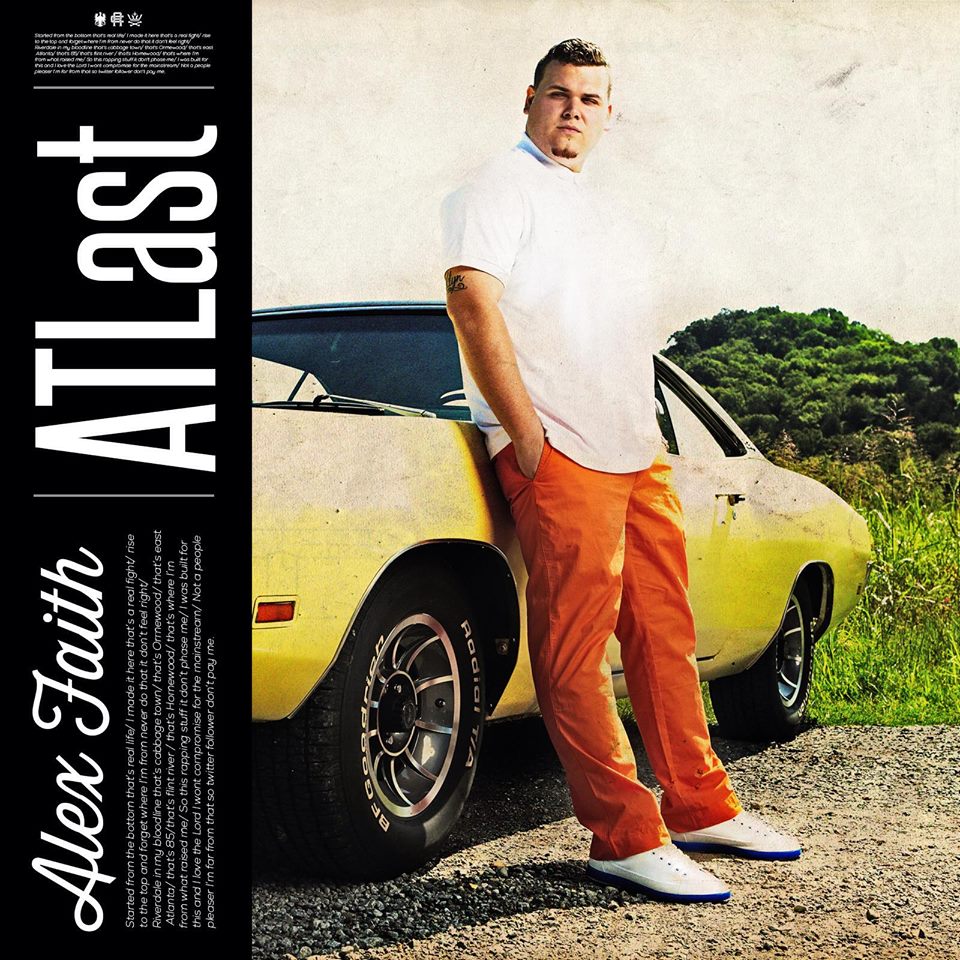 Atlanta native Alex Faith’s long-awaited and highly-anticipated debut solo album with Collision Records, ATLast, is here…at last. Well, in less than a week on November 5th it will be anyway. However, for those who treated themselves to the streaming sneak preview courtesy of Collision, they know what many in the CHH culture would have expected; Alex’s album bangs. With a cohesive, yet diverse palate of production, this debut manages to deliver the goods in living up to the billing.

From the opening salvo of “ATFirst,” this album keys the listener in and lets you know you’re destined for a walk in Mr. Faith’s shoes. The fact that the single “Letting Me Go” is the only true solo effort to be found on the project does not even seem to take away from its credentials. If anything, oddly, it adds to them. I say that, because, after listening to the entire work and very much enjoying it as a whole and finding many of the tracks to have immense replay value, ”Letting Me Go” still holds its own with a strong claim to best cut of the lot. It’s not as if an album chock-full of many heavyweight features and production credits didn’t produce plenty of contenders for that title though.

ATLast’s first full-length song comes in the form of “City of Nightmares” featuring Tragic Hero. Cardec Drums’ production knocks the listener upside the head with a deep, heavy din that inundates the atmosphere and sets the scene flawlessly for the tales of pitfalls meticulously illustrated by the two MCs.

Following right on the tails of that dose of the darker side of town comes “Light Up” featuring seasoned veteran Trip Lee. Seemingly balancing the scales in the immediate aftermath of the previous track, Wit’s airy synths lightly bubble and hum as Trip and Alex discourse about letting their lights shine to the world.

The strong sonic textures of J.R. lend themselves to “Hold Me Down” on the production end and “Bloodlines” on the chorus vocals, both with aplomb. In between those two songs, Humble Beast’s Odd Thomas contributes a crisply-delivered and compelling spoken-word piece entitled “Refuge”. Also, as one might expect, Christon Gray makes two appearances where the multi-talented Renaissance man does his thing on both “Hold Me Down” and the album’s title track, produced by Wit and Swoope, respectively.

Perhaps the album’s most taut stretch of juicy material comes on tracks 8 through 11. First, Andy Mineo lends his homie a hand in conveying a heartfelt and heart-rendering tale of brokenness and rejection by aiding the effort with a beautiful hook as well as a standout verse on “Runaway.” Probably one of the album’s best bangers, along with “Letting Me Go” and “City of Nightmares,” “Pull Up” finds Alex talking tongue-in-cheek smack to his mainstream counterparts, whilst witnessing the dual H-Town representers Tedashii and Corey Paul popping trunk and murking a beat, respectively. It doesn’t get much better than that. Or does it?

This is where the duo known as the Wolfpack a.k.a. Misfits a.k.a. Social Club a.k.a SCMGWP for short, shows up. And they get down, but they don’t give up, as the title to the song “Never Giving Up” belies. The cameo comes across effortlessly as Marty spazzes on the beat and Fern calmly makes it his own.

On “Refuge,” Dre Murray and J. Givens lyrically smash the sonic backdrop. J. Givens, in particular, brings some whimsical wordplay and lithe lyricism to the forefront.

By the time “ATLast” comes around to wrap the album up, you feel as though it’s time for the feature artist to have the final say. Alex does so eloquently and fluidly. You’ve been on a ride, with ups and downs, but it never falls flat. However, it does end too soon, but overall, I would give this freshman effort a 3 ½ out of 5. It falls somewhere in-between good and great, with a hypothetical 5 being excellent or superior. Kudos to the kid Alex Faith and the Collision Records family, as they worked worked tirelessly to deliver a quality offering and ATLast doesn’t disappoint.

[Editor] ATLast is set to be released in stores and online November 5th so you can either pick up a physical copy in stores post release date, pre-order a physical record here or you can pre-order your digital copy from iTunes. The physical CD has two bonus tracks on which may help sway your decision: