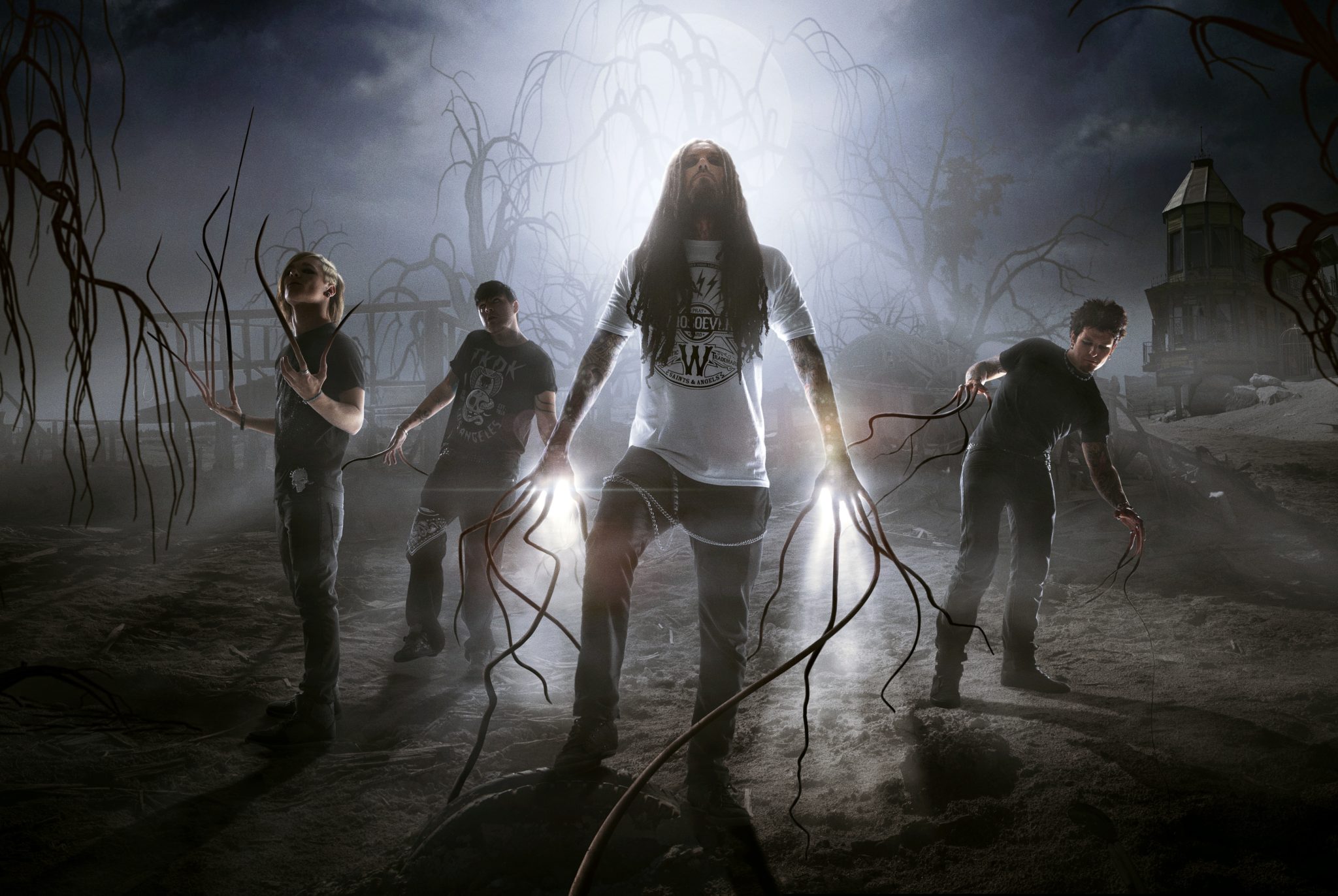 Twenty Questions With JR Bareis (from Love And Death)

Once upon a time, Brian “Head” Welch played guitar with the secular rock juggernaut KoRn. Shortly after his departure from the band eight years ago, Brian left his sordid past behind and found the restoration only found in Jesus Christ. In 2011, he started a solo project branded under his name. But his desire was to create a situation more in line with what he knew and loved. He preferred the push and pull dynamic; the sharing of authority inherent in bands. Eventually, Brian’s perspective won out and the solo project was transformed into the band Love And Death with Brian assuming guitar duties as well as the role of lead vocalist.

Brian’s recent reunion with KoRn has led to heavy touring for Love And Death, with Brian pulling double-duty as guitarist for both bands. While on temporary hiatus as Brian tours Brazil with KoRn, I was provided the opportunity to interview eighteen year old guitarist JR Bareis…

JW: Hi, JR. Welcome. Thanks for agreeing to do this interview.

JRB: Hey thanks for having me!

JW (Q1): Tell me a little bit about yourself – where you grew up, where you live now and that type of stuff…

JRB: Well I was born in San Diego, CA and then I moved to Arizona when I was 5 and have been there since. It’s pretty hot in Arizona. I don’t think I’ll ever get used to that!

JW (Q2): I’m originally from Florida, so I understand what you’re saying. How long have you been playing guitar?

JRB: I’ve been playing for a little over 7 ½ years now. Wow time funs when you’re having flies!

JW: (Q3) Who are your biggest influences on guitar?

JRB:  Well the band that really got me into playing guitar was Pillar. Noah Henson is the guitar player. I just loved the guitar work in their songs and it really inspired me to play. What’s awesome is since I have gotten into the music scene I’ve met him and we are pretty good friends now!

JW (Q4): I’m a big fan of early Pillar and love Noah’s playing. He was at my church a couple months ago but I was away that week. I read you joined the band when you were fifteen. How did you progress to the level where you were good enough to join a band with musicians of this caliber?

JRB: All I can say is that it is a gift from God. A lot of hard work too. I really had to drive myself to practice every day and not give up. Also had to endure my parents yelling at me every day because I didn’t do my homework since I played so much! (laughs)

JW (Q5): Looks like it paid off, huh? So how did you go about getting into the business? Was there any secret connection you relied upon or did luck have a lot to do with it?

JRB: No connection whatsoever. Back in 2011 Thousand Foot Krutch was holding YouTube auditions for a new guitar player. I really felt that I should try out so I went ahead and recorded a video and posted it. Little did I know that Brian Head Welch’s guitar player stepped down right at the same time and he was trying to find a guitarist for a tour he had coming up. His manager saw my video on YouTube and showed him. He somehow got in contact with a friend of mine that I was in a local band with at the time and he connected us together. They thought I was like 20 from the video but they were kind of dumbfounded when I informed them that I was 15. I’m very thankful that Brian trusted me and brought me on anyways. It’s been an amazing experience!

JW (Q6): That’s sweet news. I’m a huge proponent of grassroots marketing. Is there any other advice you can give young guitar players who would like to follow the path you’re pursuing?

JRB: Keep going and don’t give up! I could have easily gave up but I kept trying, despite my age. I would highly recommend using the internet to your advantage. Post videos of you playing songs you know. Get your name out there. Give it your all!

JW (Q7): Sure. Hard work is essential in any type of success. You always hear horror stories about the music business and people trying to take advantage of you; or tragic stories about the ruined lives of those in the spotlight. Do you have any words of wisdom you can pass along to our readers regarding things to watch out for?

JRB: Well luckily I haven’t run into this problem. I think the biggest thing though is to read a contract before you sign it. You never know what they could have snuck into the fine print. Keep track of your money on the road. Write down any kind of per diem or advance you have been given.

JRB: Well when we first released it back in January, the label just merged with Sony and so it was chaotic. They wanted to re-release it now that they are settled. It has a new song and a couple remixes on it.

JW (Q9):  I’ve been listening to the album several days straight now and love it. What’s your favorite song on the album and what makes it your favorite?

JRB: Meltdown. I love everything about that song. The music, the melodies, the lyrics; it gives me chills every time we play it!

JW (Q10): I’ll have to agree with you on that one. Meltdown is a hot track. Speaking of playing live, what should fans expect from a Love and Death show?

JRB: ENERGY! We move so much during our shows. The music is high energy so that’s what we set out to prove in our show. Brian is usually whipping his dreads around, I’m running around swinging my guitar around me and banging my head up and down, Dan is destroying the drums, and Val is creepily staring into your soul while playing bass. Yeah, it’s a circus up there but we love it!

JW (Q11): Huh…I had imagined you guys as more of a shoe-gazer band. (laughs) Do you have any horror stories to share from the road?

JRB: Probably when we went to the airport after a show and I had to sit there for 13 hours to wait for my flight home. Everyone else had flights that left early that morning. I almost died of boredom!

JW (Q12): Flying is the absolute worst these days. I’d rather hop on a tricycle and peddle my way home. It takes a lot of patience to fly. So let’s get down to brass tacks. I know the band is out there touring with KoRN and other secular bands. Do you guys have a ministry aspect to the band while you’re in that environment?

JRB: Our music is more aimed towards the secular realm. We talk about struggles in life and getting through them. We just want to show people that Jesus doesn’t care if you wear skinny jeans and makeup and listen to rock music. He wants you to enjoy life and love others. It’s not by works that we are saved, but through Jesus and His amazing grace. He is not religious. He just wants a relationship with you. You’ve just got to accept Him and live for Him and he’ll take care of the rest!

JW (Q13): I think it’s important for good Christian people to engage the culture. Otherwise we’ll lose the battle. So I can’t argue with your perspective. Does Brian’s reunion with KoRn present any challenges for Love And Death as a band moving forward?

JRB: Honestly, yes. He’s been doing everything he can do to get us on Korn’s tours. We understand though. Korn is obviously bigger and is the priority over Love And Death. We’ve just been taking it one day at a time and enjoying the ride!

JW (Q14): What’s the largest crowd you’ve played before? Were you nervous?

JRB: It was somewhere in Europe. I can’t remember where exactly but I believe it was around 40,000 people. It’s crazy because I was actually more excited and pumped to play. I wasn’t really nervous at all.

JW (Q15): I typically like to ask bands what their “dream tour” might look like. I’m not sure that’s relevant for you considering some of the bands you’ve already played with. For the sake of argument, if you could envision your personal “dream tour,” what bands or artists would you choose to tour with?

JRB: My dream tour would have to be U2, 30 Seconds To Mars, A Day To Remember, Killswitch Engage, Pillar, and Sent By Ravens. That would be like a festival tour!

JW (Q16): I remember seeing U2 on the Unforgettable Fire tour. It was literally a religious experience. To see 20,000 people singing Psalm 40 sent shivers down my spine. But back to you…what’s one little-known fact about you that might surprise your fans?

JRB: My real first name is actually not JR.

JW (Q17): Really? My name is not JesusWired either. (laughs) What do you do with your spare time when you’re not involved with the band?

JRB: I’m usually running all the social media sites for us. I like to spend time with family and friends when I’m home. I’ll play some video games in my spare time! (laughs) I’ve been trying to write some new music as well.

JW (Q18): So a lot of fun stuff. It’s great to do what you love, right? What’s your favorite band or artist of all time?

JW (Q19): (Laughs) Journey, huh? I didn’t see that one coming! What song or album is currently getting the most traction in your iPod?

JW (Q20): Sounds interesting. I’ll have to check that out. Where do you see yourself in twenty years?

JRB: Hopefully still doing music. It may not be Love And Death but hey, maybe it will be. You never know!

JW: Whatever the case, I hope Love And Death continues to have an impact in the secular realm. People so desperately need Jesus. Well, that was the last question. Thanks again for your time, JR…if that really IS your name! It was truly a pleasure getting to know a little bit more about you. Be safe out there on the road!

JRB:  Thank you for having me! God bless you guys!

[Editor] You can purchase your digital copy of Love & Death’s Between Here & Lost (Expanded Edition) album on iTunes and Amazon  as well as many other fine digital and retail outlets. You can also view the video to “Meltdown”, ours and JR’s favorite song off the album, below.