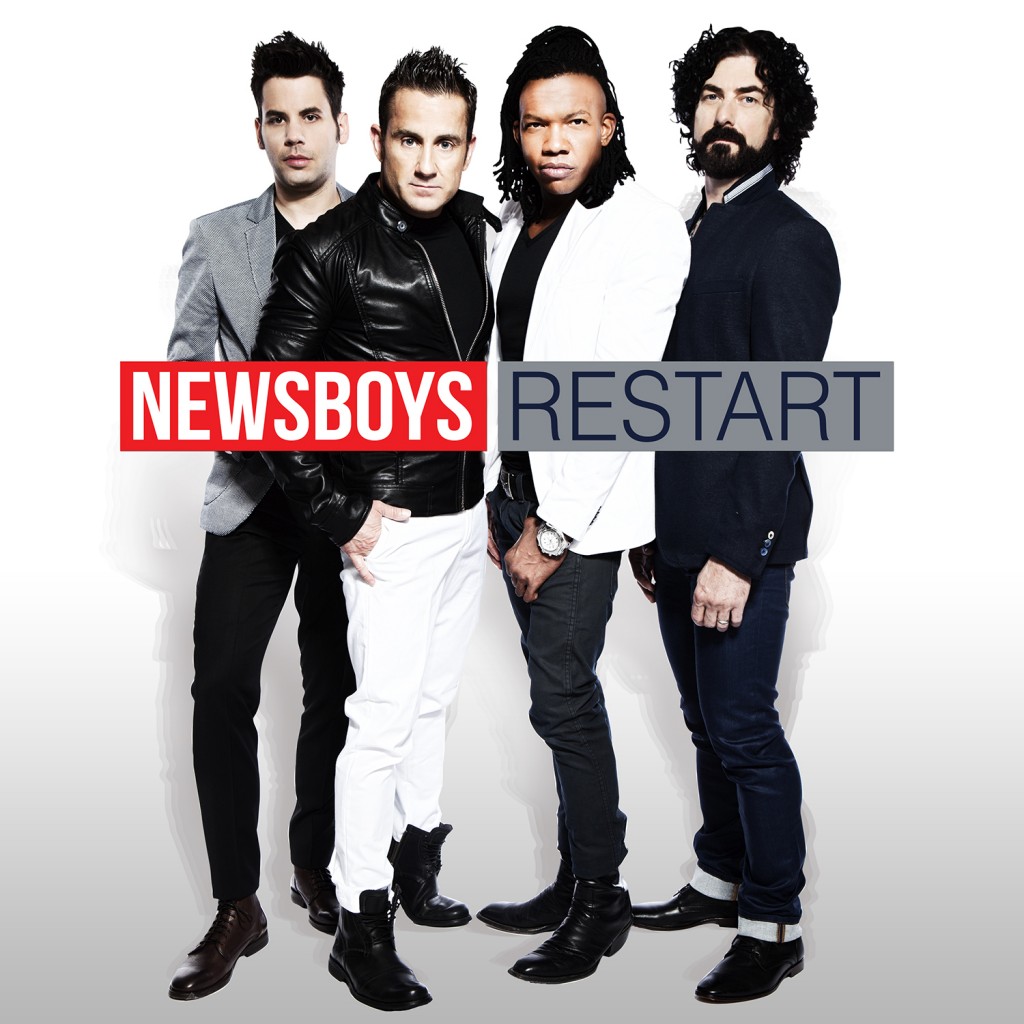 Ever since Michael Tait became the lead singer for the Newsboys, the band has started a new era, complete with a new sound. As a 21-year-old band, Newsboys is looking for a way to sound relevant and remain inspirational in an industry where standards and styles are always changing. After the successes of their last two studio albums, Born Again and God’s Not Dead, Newsboys decided it was time to change up their style again and do something fresh. The result? Restart, an album that lives up to its title in more ways than one.

The album is very well-produced–in fact, it’s over-produced–by four different producers: David Garcia, Seth Mosley, Joshua Silverberg, and Christopher Stevens. Most of the songs were produced by Silverberg and Stevens, and both producers are adept at layering the instruments and vocals to get the right radio-friendly combination. Indeed, almost every track on this album would do well on Christian radio. Is that necessarily a good thing, though? Let’s take a closer listen…

The album kicks off with the energetic hand-clapper “That’s How You Change the World.” The song sends the simple message that we need to pray for and help the people around us–it’s “the smallest spark that can light the dark, that’s how you change the world!” This is a song that will sound great played live in an arena.

Next is “Restart,” which has an old school Nintendo melody (think David Crowder* Band meets TobyMac). The song is about how God finds us when we’re lost and restores our lives. “Love Like I Mean It” has a 1980’s groove to it, and the lyrics lament how we often talk about loving others but we don’t always put our words into actions. The bridge references 1 Corinthians 13 when Tait sings “I can speak with the voice of angels, even tell you that I got your back, but I wanna do more than that, I gotta do more than that.”

The next track, “Live With Abandon,” is the first single off Restart, and this song fully encompasses the main message of this album–once our lives have been redeemed, it’s time to restart and live with abandon. For a more in-depth look at “Live With Abandon,” read my review of the song and music video.

By the time the album reaches it’s fifth track, “Go Glow,” listeners might feel tired of fast songs and need a change in pace. Thankfully, the next song, “That Home,” is a simple piano ballad written for a mother who raised her children and reached out to the community with her unshakeable faith. It is easily one of the standout tracks of the album. Fair warning: the bridge of this song is tear-inducing, so if it is released as a radio single, keep tissues handy in your car!

“Fishers of Men” is another standout track on the album, leaning more on the rock side of pop rock. The chorus echoes what Jesus said in Matthew 4:19, “Then He said to them, ‘Follow Me, and I will make you fishers of men.’”

“Enemy” is an example of how the production can get in the way of the message of the song. The lyrics of the song tell of the internal struggles we face as Christians–doubt, pride, and bitterness–and how no matter what, God still doesn’t give up on us. The song suffers, though, because of the beats and synths that we hear not only in this song, but in the majority of songs on this album. It would have fared better with a more stripped down production.

Bottom line: While the album tends to be repetitive in sound, it is still a solid, high-energy effort from Newsboys. Worth purchasing…but as far as which edition you should buy, keep reading.

“Overflow” is an upbeat track with a catchy beat. It’s about the forgiveness and joy we receive from God. As far as its absence from the standard album, it’s no big loss–this song sounds vaguely similar to TobyMac’s “Me Without You.” In fact, someone ought to do a mash-up of these two songs.

“Man On Fire” is a funky tune with a groovy guitar hook–until it reaches the chorus, and those synths kick back in. The lyrics are about how “God is a consuming fire,” and the guest vocals from Kevin Max add an extra dimension to the song. This song could have easily replaced one of the songs on the standard edition of the album.

“God is Movin’” is an appropriate reminder that we are in the midst of spiritual warfare. In fact, the beat in the song sounds like a punching sound effect from a video game. This also would have been a welcome edition to the standard edition of the album.

“In the Living Years” reminds us to make the best of each day, and to say what we need to say to our loved ones and friends while they are still alive. Just like “That Home” was written for a mom, “In The Living Years” was written for a dad. The female backing vocals on the chorus make it unique from other tracks, and the catchy melody would have made it album-worthy.

“Stronger” sounds like a Chris Tomlin worship anthem–in a good way. In terms of sound, it would not have fit in well with the synth-heavy tracks on the album. However, this song would have been a welcome change in pace.

Overall, this is one of those instances in which the bonus tracks sound just as good, if not better, than the ones on the standard album. With that said, the deluxe version of Restart is most definitely worth purchasing!

Restart can be bought on iTunes and at many other fine digital retailers.