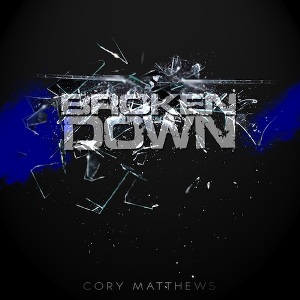 Cory Matthews Provides First Aid for those who are Broken Down

Broken Down? In need of recovery? Don’t fret because help is at hand!

At the end of March, New York native Cory Matthews released his brand new single “Broken Down” featuring A.J. The track, off his upcoming album “UnAfraid”, was produced by Sinima beats and engineered by Jordan Clark in Albany, NY.

Effortlessly blending elements of both hip-hop and rock, Cory brings us an incredible track infused with hard hitting crisp lyrics and a powerful message. Cory describes the meaning behind the song in much more detail below,

“The first verse of the song is written to a man who lost his family in a drunk driving accident and felt as though it was his fault. This man could not understand why God would allow this to happen to his family. Instead of turning to God who wished to heal his broken heart… he closed himself off to society and began to use drugs as a means to escape feeling. I really wanted to express to this man that he is not too far gone and that God still loves him and wants him to come to Him…even in his broken state so that he can be made new. God wants forgiveness for all and sometimes the hardest person for us to forgive is ourselves.

The second was written for a tremendous girl who had fallen victim to rape. As it always does, this experience left the girl traumatized and questioning where was God. This girl’s faith was strong and she regained her faith but her relationships suffered. She felt abused and weak…no longer worth her true value. This song is meant for her…to know that she is still loved and truly a daughter of God. No man can take away her beauty in His eyes.

In prior weeks I had heard some really traumatic stories that had me questioning why God allows evil into the world…a question that is asked regularly to Christians. I understood the concepts of free will but when it comes to one’s life, it is much harder to just take that… Sometimes it feels as though God abandons us.. This song was really written to show that in those times where we are Broken Down…that is when God is calling out to us the most. We have to break out of ourselves and realize that we are not strong enough to overcome on our own…but with the strength of God all is possible. God loves his children and does not wish us to suffer. So when we do, God wants to be our crutch, our defences, and our respirator…filling us with the breath of life.

I really wrote this song to let the world know that there is never a place where you cannot turn to God. He wants everyone where they are at. Clean, dirty, or absolutely Broken Down… God wants all of us.”

“Broken Down” opens with some delicate piano key strokes accompanied by a various assortment of softly sung ‘hey’s, ‘oh’s and ‘woah’s which, along with the opening chorus, helps set the contemplative tone for the rest of the song and gently eases us into the first verse. The lyrics are crafted with finesse and in such a way that each time I listen to the first verse it conquers up the same vivid image of a man on his knees, bound in heavy chains, in a cold and damp dark room desperately crying out to God to save him. As Cory punches out the following hard hitting vocals from the first verse with conviction you can feel yourself being swept along for the ride from despair to redemption, swiftly growing more confident in yourself and God’s love,

“…you think that ya past defines you
every time you try to forget, circumstances reminds you
of how you’re unclean, so unworthy
tear ya self away from the world feeling dirty
your past trials don’t form your identity
God said to forgive your enemies
well sometimes, that means forgive yourself
don’t just place your problems on the shelf
you are more than the person that you used to be
you are dressed up in beauty, and His majesty
you’re a son or a daughter, of the God of mercy
And He will save you, no matter if you’re worthy
So God let me stop letting all this pain hurt me
I’m starving for the truth, and these scars have me thirsting…”

It’s when the chorus triumphantly hits, however, that chills are truly sent scuttling down your spine. It’s at this point, in my mind, that the man’s chains fall to the ground as he stands and spreads his arms wide in surrender to our God above, cloaked in the bright light suddenly flooding through the window.

As the second verse commences we’re immediately thrown into the confused and lost mind of this poor girl and, in echoing a question many of us humans have cried out to God in the past, “God where were you when I was on the ground, hoping, choking, broken down” we’re just putty in Cory’s hands. Cory molds his lyrics perfectly to take us on a roller-coaster journey through her thoughts where we feel her pain as if it’s our own and, although safe in the knowledge that God is always there, by the end of the verse we’re left desperately crying out to God with her “I need someone to come and Save Me”.

The final renditions of the chorus achieve something quite remarkable as they cause the listener to experience two almost polar opposite feelings at the same time. You’re left crying out to God for His grace to save you from a place of desperation but you’re also left feeling majorly encouraged and safe in the knowledge that no matter how “Broken Down” you are, God will always want you. Somehow it works (don’t ask me how though)!!

It takes a few listens to truly appreciate what the piano sounds bring to the table but after a while you come to the realisation that they add an extra depth to the track, in that they complement and interact with the hip-hop beats seamlessly . I think I can also detect some guitar in there as well but I’m still very new to looking beyond the surface of songs at each individual element so please forgive my ignorance!

It doesn’t seem to matter whether I listen to this track to analyse and dissect it or whether I’m just listening to it for pleasure, or even what mood I’m in, it never fails to deliver the goods; all of which point to “Broken Down” being a truly great song. Since I stumbled across it completely by chance whilst doing updates for my Christian Contemporary Music facebook PAGE three weeks ago, and then pretty much immediately purchasing it, I’ve listened to it over 140 times, and that’s not even including the plays on soundcloud and youtube before I bought it! I think it’s safe to say I LOVE this song, I really hope you do too…

You can listen to “Broken Down” below and you can purchase it on iTunes HERE (it’s also available via other fine digital retailers).

Want to keep up to date with Cory Matthews‘ music? Then go and like his facebook page HERE and/or follow him on twitter HERE. If you also want to know a bit more about Cory there’s a brief bio beneath the video.

Living in New York with his father, who just happened to be a DJ, Cory Matthews grew up in love with music. His cousin was a rapper and Cory felt called to hip hop thanks to its authenticness and pure ability to express exactly who the artist is and what they believe in. Although not having the easiest of upbringings and having to live pay check to pay check, Cory recalls that they never let the lack of money stop them from having a good time and spending time with each other. Cory did however give up on his dream and pursue other types of music after being consistently told by everyone that he didn’t look or talk like a rapper, that he was the wrong colour, that there was no way he could do hip hop and so on. Up until College broke the group up, Cory pursued other music options by playing the drums for a band which included his close friends Kevin, Dylan, Nick, Justin and, the guy who’s featured on the single, Adam.

Cory had attended church in the past but it was around this time that he had a massive calling from God and begun a personal relationship with Jesus Christ. He also begun to witness to the inner city youth that he felt he had a close bond to and it was through this that his love for hip-hop was re-kindled, “I just felt that I could really witness the gospel in an attractive way through hip-hop. Rap music has always been about being real, telling your audience who you are, what you believe, and taking a stand.”

Cory’s now gaining a name for himself in both the hip hop music and the Contemporary Christian Music scenes. Cory however remains his humble self, “I am still in shock at how many people listen to my music. It is truly a privilege to be able to serve. I am by no means worthy. I think that shows the power of Christ in a real way… He takes a guy like me who has faults, mistakes, and doubts…and graces me with the ability to serve him. Who am I to be a herald of God’s good news for his people?”