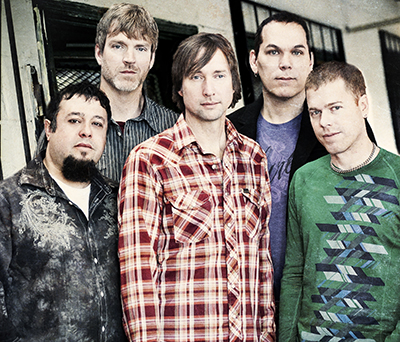 Christian Rock group Smalltown Poets return with a brand new EP entitled “Under The New Sun,” the first non-holiday album in 8 years since the release of their 2004 album “It’s Later Than It’s Ever Been” through BEC Records/EMI.

The Atlanta, GA based quintet reformed in 2011 to release their first official Christmas album “Smalltown Poets Christmas” and, as much fun as they had reworking Christmas songs, are said to be relishing a return to their musical roots with “Under The New Sun.” The band is known for crafting lyric-intensive songs from the ground up, quite often turning a few phrases and sneaking in a few puns but, most importantly, inviting the listener to explore the musical landscape with their own imagination.

The title of the EP “Under The New Sun” is taken from an old Villanelle song “May Day” (Villanelle being a previous incarnation of Smalltown Poets). The lyric “under the new sun” sums up many of the themes on the new release including death, rebirth, renewal, restoration and resurrection.

The 7-track EP opens with the title track, an atmospheric instrumental which, with its spacious guitars, eager chord progression and piano melodies, sonically paints the hope of a new dawn. It sets a mood of tranquility and encourages the worries and stresses of the world to fade away. After the peace instilled in the opener, “Turn Around” is sure to get your heart racing as it uses mile-a-minute word pictures to take you on a roller-coaster ride to a bullfight and back again through space. “Charlie Brown’s Lament” follows the classically familiar relationship of a boy and his dog with Smalltown Poets fetching the irony to tell a timeless story in their own unique manner.

The reflective yet driving “Grace Is a Song”, with the resurrection story as its backdrop, is a celebration of hope and leads beautifully into the worship classic “Jesus I Come.” The song takes on new life as it’s given the Smalltown Poets treatment. The melodic undertone combined with Michael Johnston’s soothing voice creates the perfect atmosphere to worship our Lord and Savior freely. The lyrics of the song are inspired by Psalm 130:1, “Out of the depths have I cried unto thee, O Lord” and Matthew 11:28, “Come to me, all you who are weary and burdened, and I will give you rest.”

New territory is broached with “The Ballad of Time and Eternity”, an Aesop-esque story including lyrics written for the lead singer’s six year old daughter which are meant to take on new meaning when she turns sixteen. The EP is rounded out with Smalltown Poet’s twist on the standard gospel song “I’ll Fly Away”, which evoked some of the finer qualities of Jars of Clay.

Whether you listen to music as a backdrop or prefer to dive right into the heart of the song (or even like to sing along at the top of your lungs), every track on this EP meets the challenge of transcending the ordinary. Smalltown Poets have once again crafted a masterpiece guaranteed to have you pressing the replay button repeatedly. Repeat after me: “Play; Rewind; Repeat!”