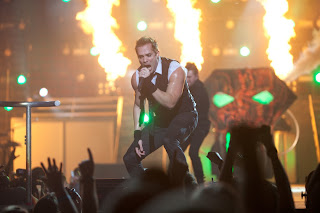 More than halfway through its unprecedented 17th consecutive season, the Winter Jam 2012 Tour Spectacular—Christian music’s largest annual tour—has played to nearly 347,000 people to date this year, with capacity audiences in 22 of the tour’s first 29 cities. In addition, more than 105,000 people have made decisions for Christ.

“This year’s tour is one of the most musically diverse line-ups we’ve ever offered,” said Winter Jam creator and NewSong co-founder Eddie Carswell. “There is something for everyone on Winter Jam. From Skillet’s amazing shut-up-and-rock headlining set, to the powerful message Nick Hall delivers, we see God at work night after night. With 18 more shows to go, we can’t wait to see what else He’s going to do.”

The Winter Jam 2012 Tour Spectacular will also stop at Dallas’ American Airlines Center; the FedEx Forum in Memphis, Tennessee; and the AT&T Center in San Antonio, Texas, among other leading venues, before concluding April 1 at Van Andel Arena in Grand Rapids, Michigan. Admission is $10 at the door, with no ticket required.

Since its formation by NewSong in 1995, Winter Jam has featured many of the top names in Christian music, including TobyMac, Third Day, Newsboys, Steven Curtis Chapman, and Jeremy Camp, among others. The Winter Jam 2011 Tour Spectacular outpaced attendance for all other tours in the first quarter, including Bon Jovi, U2, Lady Gaga and Justin Bieber, according to Pollstar’s 2011 Worldwide First Quarter Ticket Sales “Top 100 Tours” chart.

A complete list of Winter Jam 2012 Tour Spectacular dates can be found at www.jamtour.com.