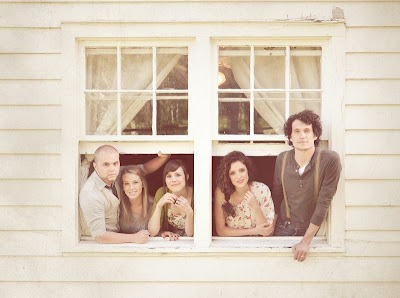 Even prior to its release, the new CD is generating a buzz in the industry and drawing comparisons to such musical luminaries as The Civil Wars, Alison Krauss, Avalon and Selah. Influential website ChristianityToday.com declares, “The mix of harmonies is nothing short of sublime, shifting from joyful to pensive to praise-filled, fitting just as comfortably on country radio one minute as a more straight-up CCM station the next.”

The five musicians originally met as students at Belmont University, where, although they hailed from different parts of the country and had distinctly different musical backgrounds and tastes, they realized they shared a common desire to communicate the truth of God’s Word as revealed in the Scriptures.

When they gathered together to share their music, amazing things just seemed to happen. One such night of musical fellowship resulted in their debut CD, a collection of Christmas songs called Until the Son of God Appears, which they originally recorded as a Christmas present for their parents. The CD then led to a month-long Christmas tour, and they have been on the road ever since.

The musicians officially became a full-time ministry in 2009 and released As Long As It Is Day, Mosaic’s first CD of original compositions. They have toured unceasingly since, honing their lush harmonies and refining their songwriting chops, while maintaining their ministry focus to encourage and edify others with the truth of God’s Word.

“We saw God working through our music and blessing it, and we realized that this was a greater calling than we had expected,” Graves says of the band’s decision to pursue a career in full-time ministry.

“We realized that, in order to be good stewards of this calling, we would need to commit all of our time to writing, recording our music and organizing our ministry in order to get this thing off the ground,” adds Jonathan Taylor Martin.

“People always ask how we come up with our arrangements,” says Emily Martin. “We have a lot of musical minds at work within the group. Basically, we just sit in a living room and sing for hours. The person who wrote the song usually guides the vision for the arrangement, but we all contribute our ideas until the song feels complete.”

“Each song carries the personal flair of the writer, but because we arrange as a group, there is a consistency to our music,” adds Molly Lockwood.

“We believe that God’s Word empowers prayer, ignites faith, and fuels our worship,” explains Patrick Lockwood. “We exist as this family called Mosaic to be musical missionaries of sorts. We exist to teach the Word of God through our music.”

That mission can be clearly heard with just a cursory listen to any of the songs on Teach Us. “One,” the project’s energetic opener, draws heavily on Ephesians 4:4-6 for its declaration that there is “One hope, one faith, one body, one Spirit of the living God.” The project’s title was derived from the song “Teach Us To Love,” a lovely, peace-filled prayer-song drawn from John 15:13 and 1 John 4:7-11. Mosaic slides easily between genres, evoking a gentle country vibe on “Japheth Song,” light and breezy pop on “Love Will Never Fail,” acoustic folk on “Trust the Lord,” and lilting jazz licks on “Fear the Lord.”

While the musical stylings may be diverse, the band’s sparkling vocals and lyrical integrity create a consistency that unifies the project. Each song on Teach Us flows into the next, creating a seamless, worshipful experience that includes praise and adoration, supplication, worship and benediction.