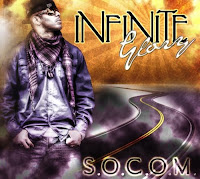 After traveling to countries like the Netherlands, Germany, Belgium, the United Kingdom, Ireland, South Korea and France, S.O.C.O.M. is back in the U.S. and set to release the highly-anticipated album “Infinite Glory.”

The message is clear: “Are You Ready” to stand against the onslaught of chaotic messages being presented through mainstream entertainment? Are you ready to help save a dying world and generation caught up in today’s media hype, lies and bondage? Infinte Glory, quite possibly S.O.C.O.M.’s best album to date, contains the single “I Want More” featuring Dove & Stellar Award Nominee Canton Jones, a song which challenges listeners to seek God in every aspect of their lives. The dance-infused “Get Low” (featuring C-Micah) is certain to become a staple in rotation for DJ’s across the globe. CCM artist Kathleen Carnali infuses a contemporary hip-hop feel into the song “Amazin” which drives home the point that, no matter what situation we find ourselves in, God is still amazing in all that he has provided for us. T-Haddy, Ric Flo and Saylah Flowz let us know that we “Can’t Lose” in a song by the same name which could easily become a #1 Billboard hit. Mic-O and S.O.C.O.M. team up on “I Just Wanna Praise You,” yet another radio-friendly song. The album also features Universal Music Group Recording Artist Mr. Del, M.O.G. Showtime, Lil Prophet, JT Logan, M’Renee and many more.